Lifjell - Mountains on the quiet side

What comes to your mind when you think of Norway? Dramatic fjords? Spectacular waterfalls? Expensive beer? Northern lights? A dude dressed in bright colours sitting on a reindeer? Well, all of these things might be the real deal. But what if you've already been there - done that? Wouldn't it be great just to calm down a bit?

Little more than a 100 km from the busy city centre of Oslo, there is a small mountain range which doesn't stand out in any particular way. There's larger mountains, higher mountains, sharper, deeper, more colorful mountains in Norway. Yet there is nothing like Lifjell. 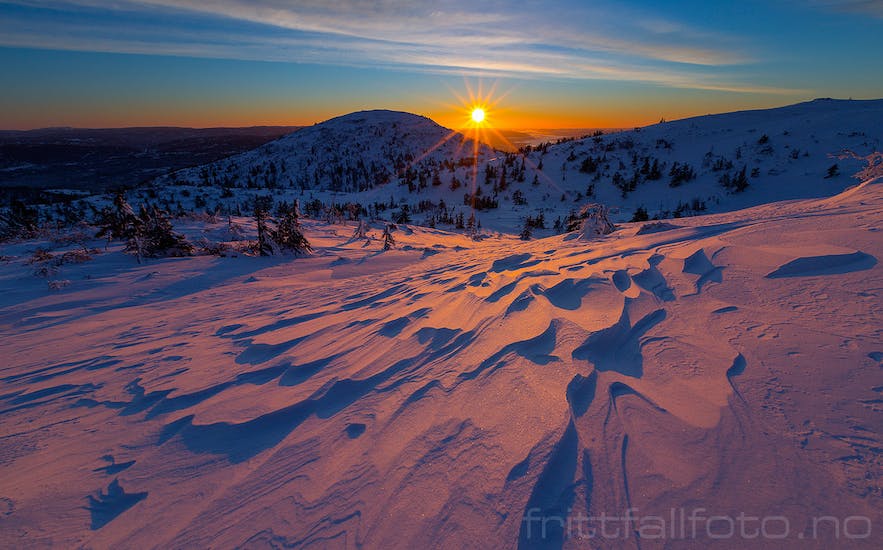 The Lifjell mountain range is located in the county of Telemark, and cover approximately 250 square km. It's shared between the municipalities of Seljord, Hjartdal, Notodden and Bø, an area home to about 23000 people (2015). But Lifjell offers what might be called "neighborhood" mountain terrain to more than a million people living in the most urbanized parts of Norway. 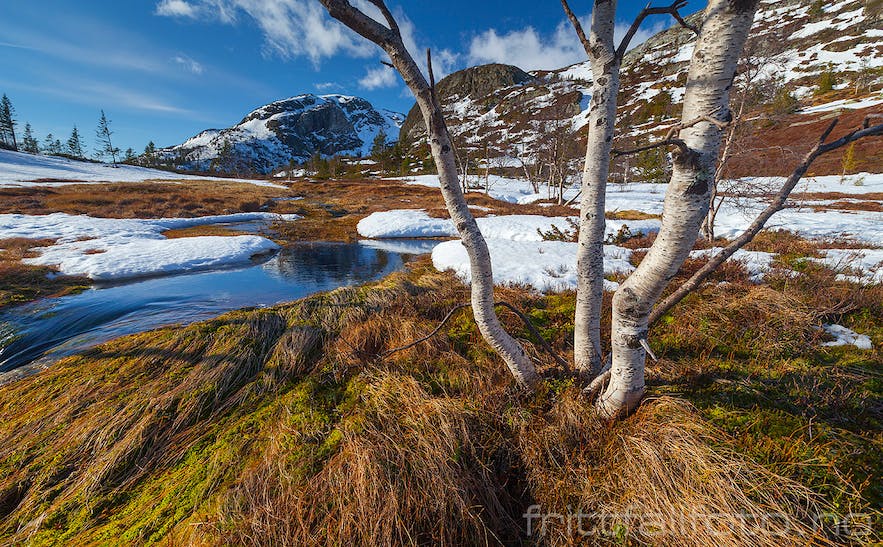 It's less than a two-hour drive from our largest city, and only half that from the urban area of Grenland in the southern parts of Telemark county. Still you can hike through the entire mountain range without meeting a single soul.​ 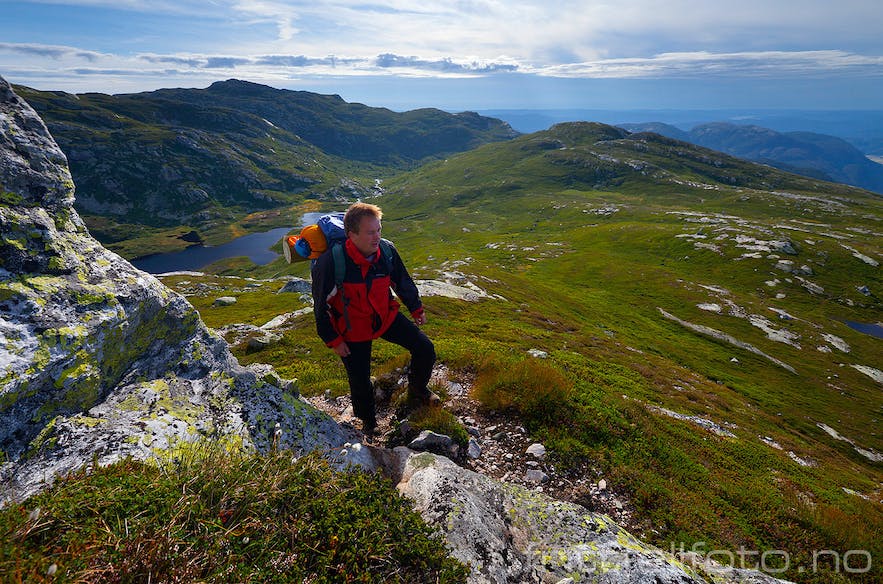 The highest and most alpine area of the Lifjell range is Mælefjell in the north-west. Here the peaks rise more than 1400 m (4600 ft) above sea level, and the terrain offers not much else than large rocks covered in green and yellow lichens. Soil and vegetation is extremely scarce, but high up on the plateau there is a couple of small lakes which brings beauty to the barren landscape. Due to the lack of soil, the water is crystal clear. 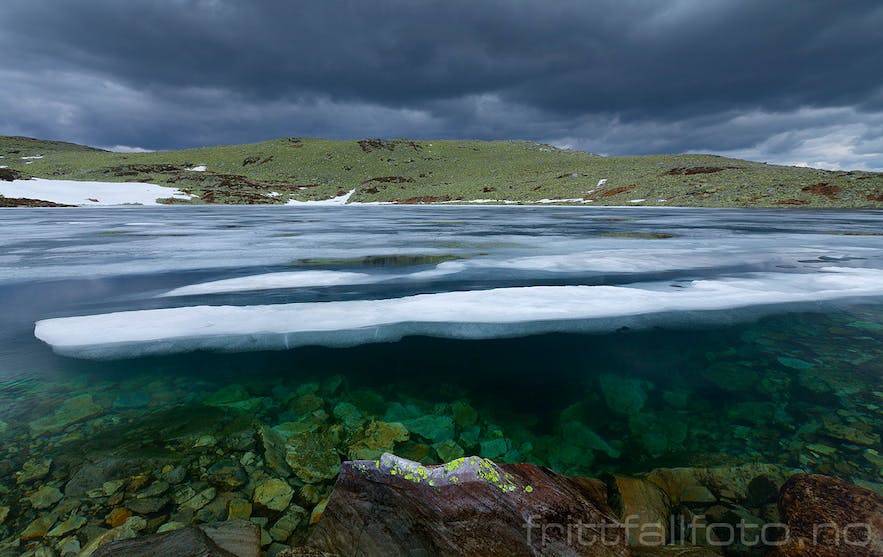 The Mælefjell plateau is separated from the rest of Lifjell by the valleys of Grunningsdalen and Slåkådalen, running east/west. South of this the central and main area of Lifjell unfolds with its peaks, hills, lakes and valleys. The landscape here is greener and more gentle than the brutal impressions of Mælefjell. Vegetation is quite lush, especially in the mountainsides facing south. A number of brooks and streams run through deep gorges with jungle-like greenery, creating nice waterfalls along the way. 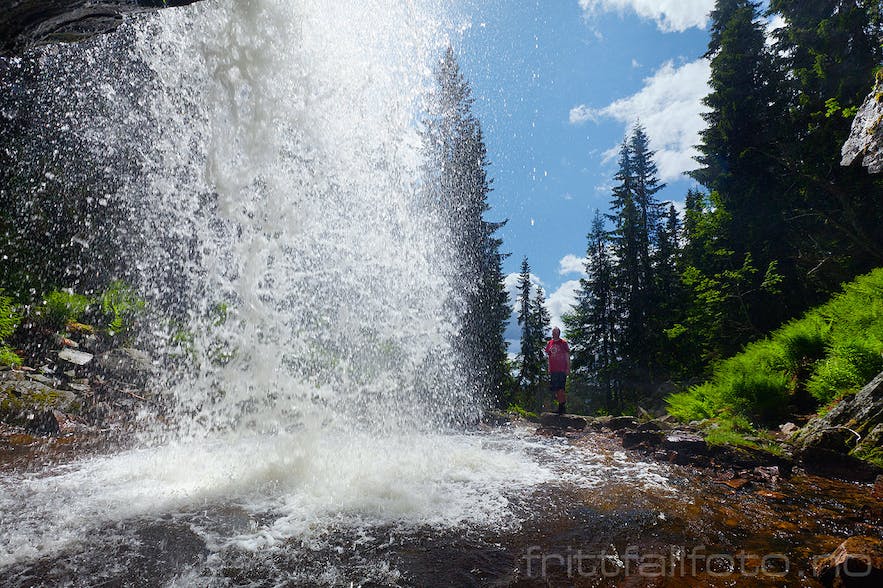 A fair number of sheep is grazing among old ruins of dairy-farms and other traces of earlier life in these mountains, which brings interesting history into your hiking experience. A summer hike through the Lifjell range can be a very calming and soothing experience. 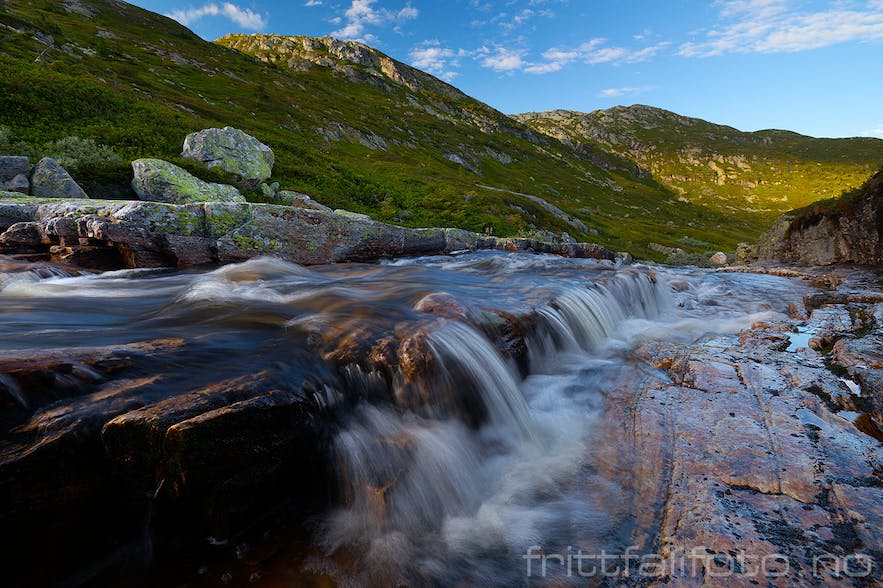 Come autumn, and the colors of trees, bush and grass shift from green to yellow, orange and red. The visual impressions under a blue sky can be quite astonishing, and hiking the mountain range at this time of year is an awe-inspiring experience. Home of the trolls

All mountain areas in Norway are home to the infamous trolls. Peaks, valleys and almost every other geographical attribute often carry names with "troll" in them. No such thing at Lifjell though, but there are numerous caves, large boulders, rock pinnacles and other terrain formations that easily could be connected with trolls. 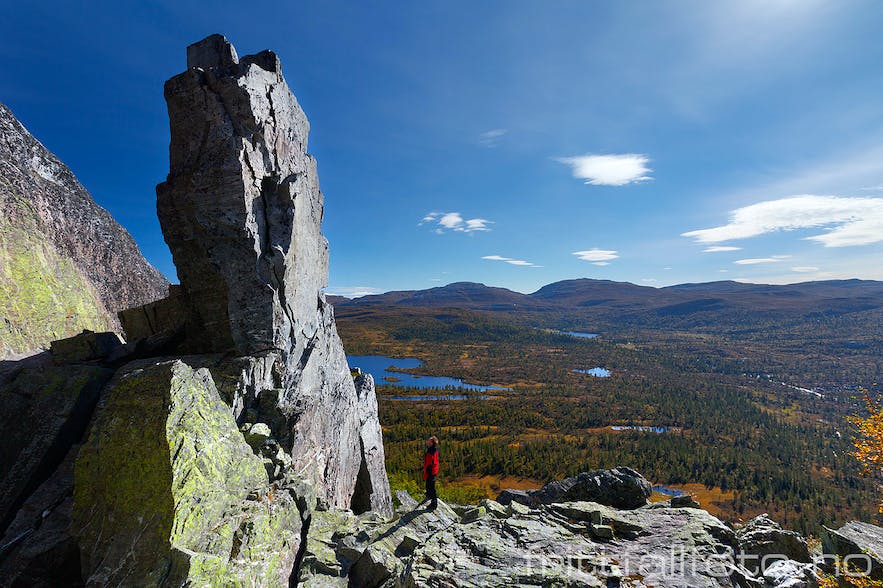 This large troll resides near the top of mount Troganatten, and is guarding the mountain from any annoying intruders. Only sheep seem to pass unaffected. 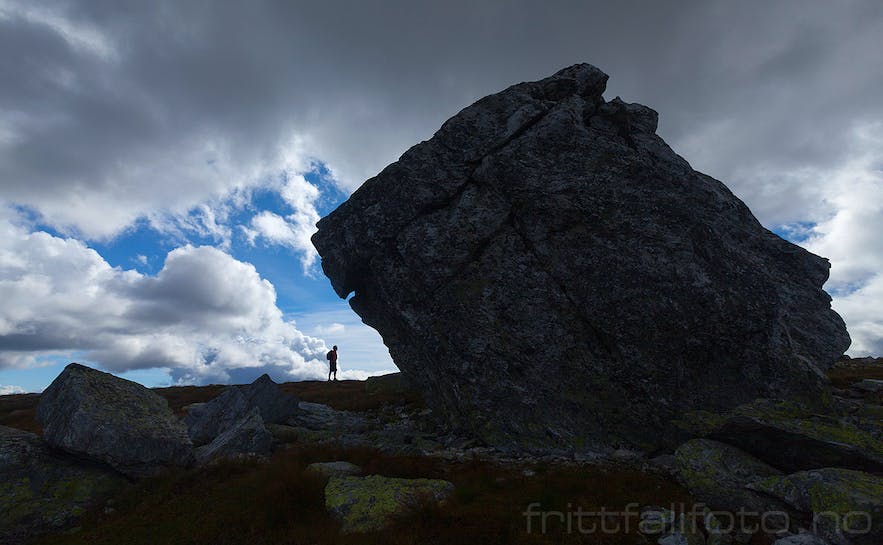 Generally there's not much hiking traffic in the central and western parts of Lifjell, the Liverpool FC anthem is often proven wrong here. However, in the south-eastern part of Lifjell there's the Jønnbu area, where a large number of private cabins and lodges create more traffic. The area is often used by the cabin owners, and the local residents of Bø (myself included). This is also the start and end point for the main ski slopes prepared every winter in this section of Lifjell, and there's also two small alpine ski resorts. 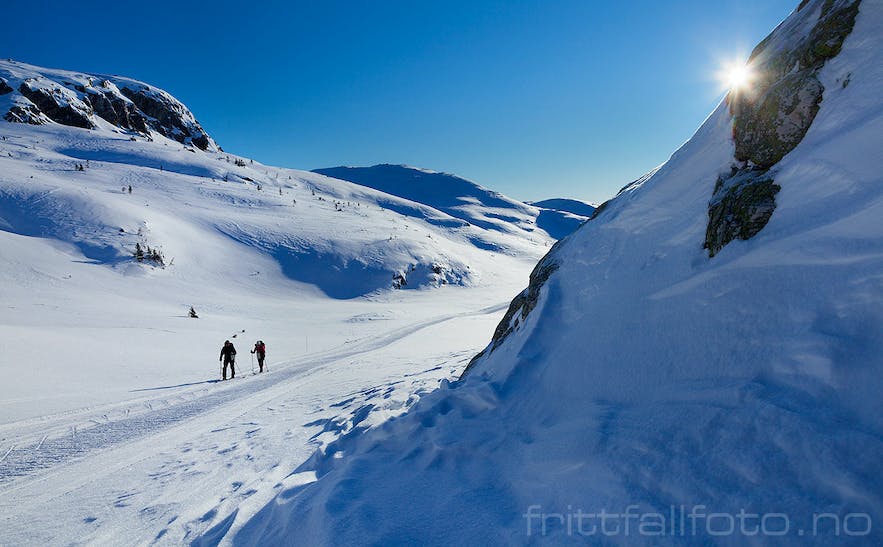 The easiest access-points for Lifjell hikes are Jønnbu near Bø on the south side, Grimås near Seljord in the west, Slåkådalen in Hjartdal in the north, and finally Myregvarv near Notodden in the north-east. All of these are accessible by car all year, most of them through local toll roads. 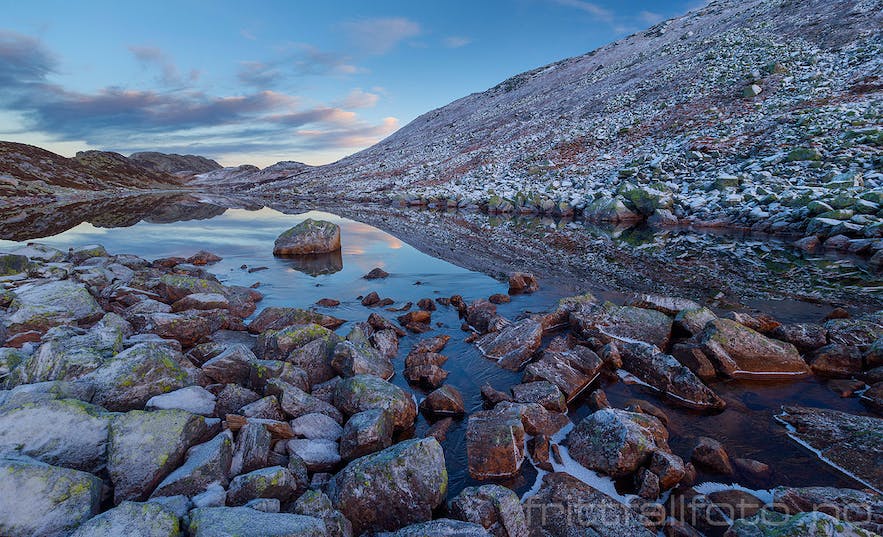 If you want a quiet hike or go skiing not too far from urban areas, Lifjell could be your next destination. 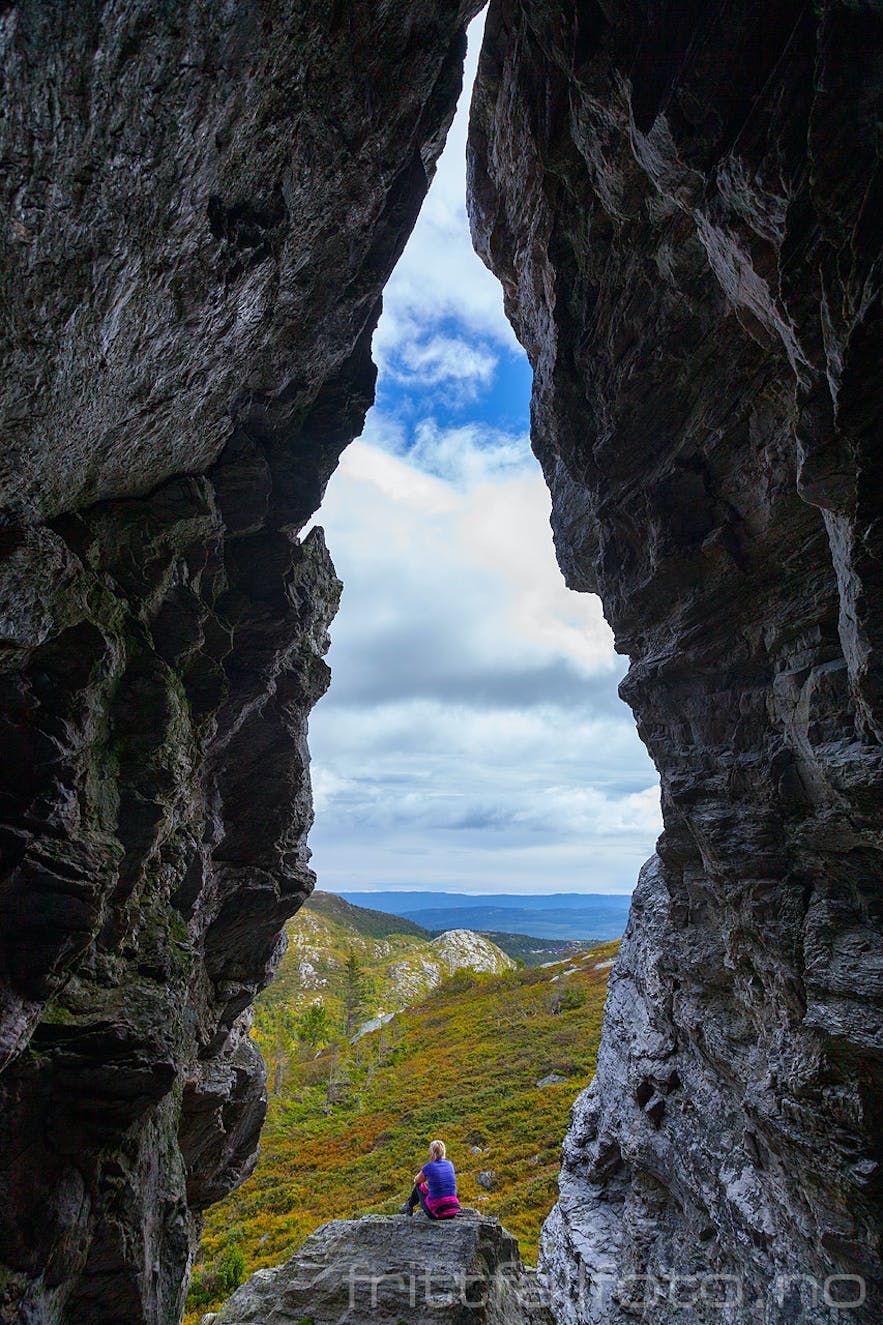