Northern Norway, especially Lofoten Islands, is a very popular destination for landscape photographers from around the world, and pictures from the archipelago has spread like wildfire through a number of websites and social media in recent years.

I am so lucky to live here, and I can see daily, firsthand, why this archipelago is like a magnet to photographers as well as skiers, mountain climbers, kayakers and so on, tourists in general. This article will, therefore, deal with the part of the country I know the most; areas north of the Arctic Circle. It caters for landscape photographers, but will hopefully be of interest to anyone else who wants to catch the best of the best, whether it is from a kayak, riding skis in the mountains, hanging on a rock wall, exploring villages, wandering along marked trails, or untouched wilderness.

Planning is important in almost everything one does. Photography is no exception. When I'm going out on a photo trip, I check a lot of things and variables that can influence on what I expect myself to experience of interesting scenes and elements.
For example, I am noticing what time of day the sun rises and sets, the same about the moon and what phase it is in. I also am aware of when the tide is high and low, the wind direction and strength, what weather there is at the moment, and what is notified. In Aurora season I keep a certain eye on what is notified about the space-weather too.

When it comes to the sun as first mentioned, it follow a different pattern here in the Arctic than it does for example. along the equator, where it always stands up and goes down roughly in the same direction and at the same time each day throughout the year.

The midnight sun period occurs from late May to the second half of July. Meanwhile, we find that the sun first rises in the south for a few minutes, then go down in the same direction, whereupon it is changing position from standing up further to the east and go down further west for each day that passes. It continues approaching the north at both ends until it does not go down at all, but hovering above the horizon around midnight, higher up the farther north of the Arctic Circle one moves.

In the dark period, it is not completely dark at midday as some want to believe. One sees clearly the light and colors of the sun throughout this period, colors that can be quite magical when the conditions are at their best. Darkness still has the power most of the day at this time of year. 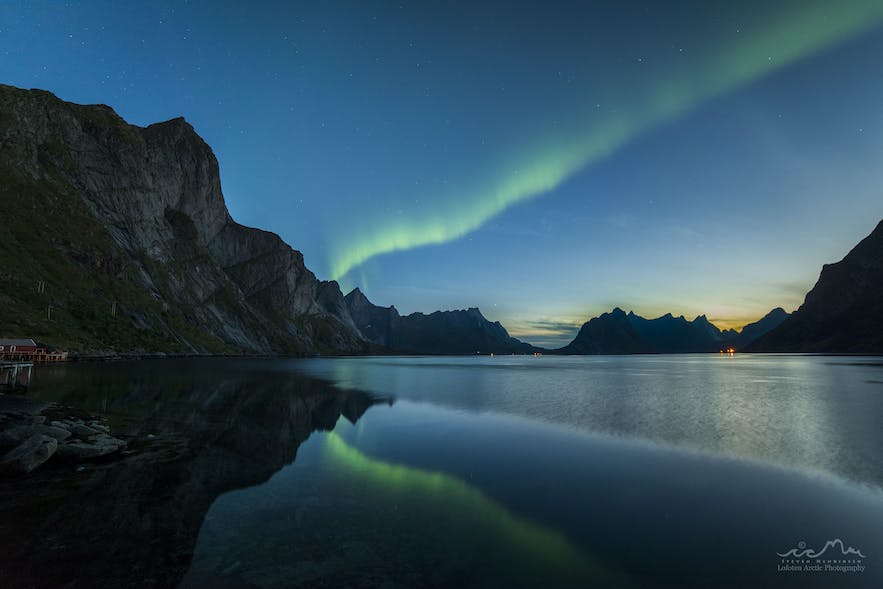 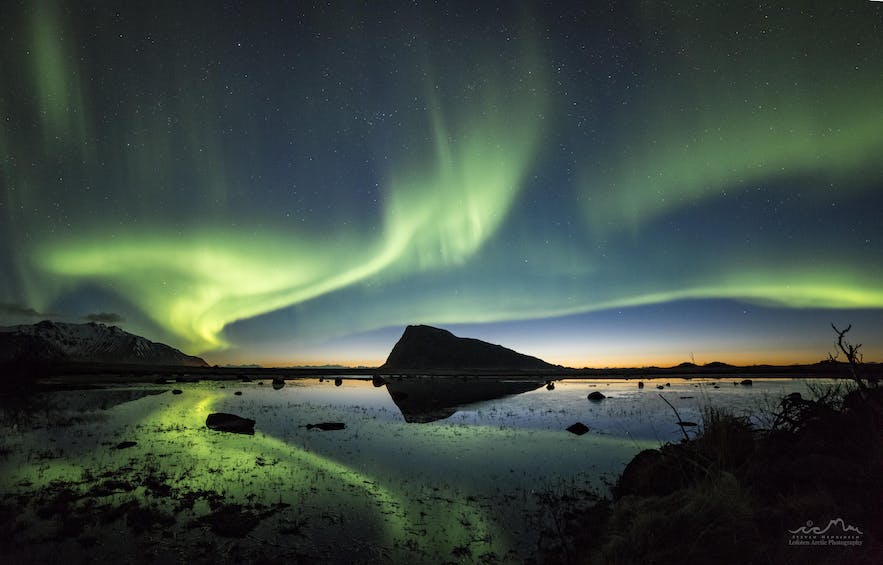 Moon phase, as well as the cardinal point where it rises and sets, is often interesting to me. Knowing this, let me plan my shots even before I leave home. Using a good map over the areas you plan to work with, is a good idea if you are not in possession of local knowledge. You will be able to plan well and be at the right place well ahead of, and before the most interesting elements and lighting occurs. A low full moon always looks enormous onto the landscape it rises from.

In Northern Norway, there are vast differences between low tide and high tide. Sometimes it is more than 3 meters difference in height of sea level. It takes about 6 hours from the ocean begins to rise until it has reached full tide. I am following up on the sea level for various reasons.

If you are here to fish trout and salmon, it is good to know that those species use to move into the rivers and lakes at high tide, while it can be the complete opposite if you fish in the ocean.

Are you here as a photographer, low tide means a lot of visible seaweed and rocks on damp ebb-parties, and many opportunities for fine reflections of mountains and landscapes disappears. I prefer high tide and can find to fault a Photo Tour of the finest lighting conditions if it is not. The time of tide moves with about an hour each day, so it is important to plan properly if you do not have a couple of weeks at leisure. 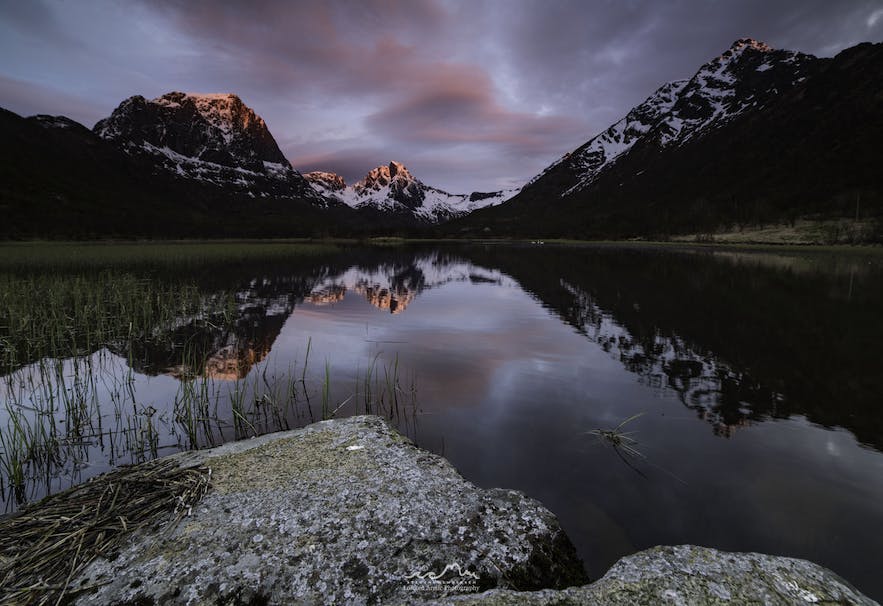 Two nights before midnight sun this year. The sunlight never left the summits!

The weather does play an important role in any kind of activity outdoors. It is important to pay attention to the weather forecast, but more importantly to actually being outdoors observing. Here in the Lofoten islands, the weather changes so fast that you will not believe it if you have not experienced it.

The weather conditions can also be very local. For example, on the north side of the islands, there can be dense fog and northerly wind. Then it's cold and little pleasant to do nothing but sit in your favorite chair with a cup of hot coffee. However, if one decides to take a little drive, in only 20 minutes you could be in a sunny landscape with clear blue sky. In summer it can be a 20-degree difference from one to the other side of the archipelago.

The Lofoten Islands stretch out through the Norwegian Sea from northeast to southwest, with the Vestfjorden on the inside towards the mainland. Landward is often the sheltered side to stay on, while many of the finest lighting conditions, including Aurora Borealis, occurs most commonly on the north side. The same applies to the midnight sun, which is always at its lowest point in the north. 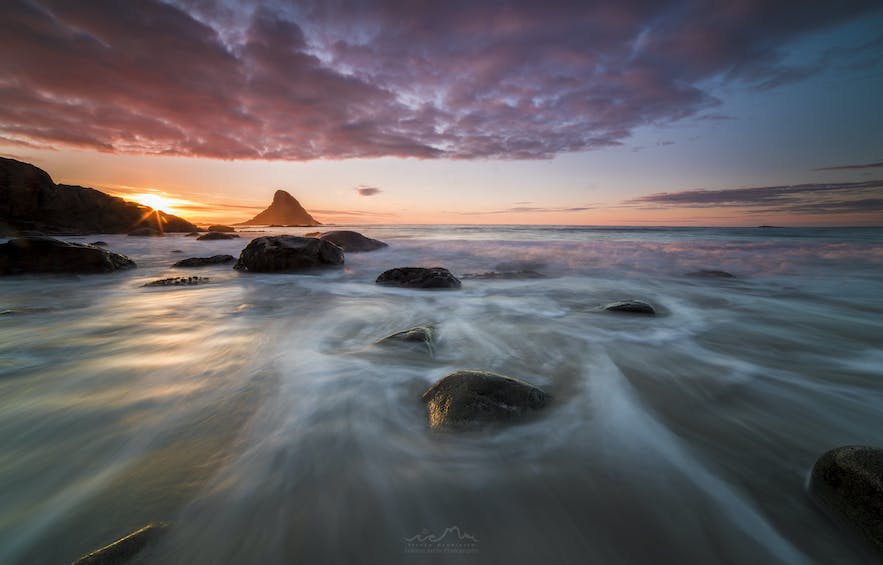 Whatever you want to get out of it when visiting Northern Norway, and whatever you intend to carry out, it's fine if you're lucky or skillful in their planning, so that you can hit the best and nicest time to explore the amazing nature we are blessed to have in our surroundings.

In the bright season I am very fond of low sun, alternating cloud cover, a few drops of rain, or a small rain squall in the distance, combined with no wind and high tide. The same applies in the winter, but then it is additionally very important to follow the timetable for the sun's movements, as well as set aside a few hours to the northern lights hunting, especially when there is a fine crescent moon that illuminates the landscape and mountains around you. 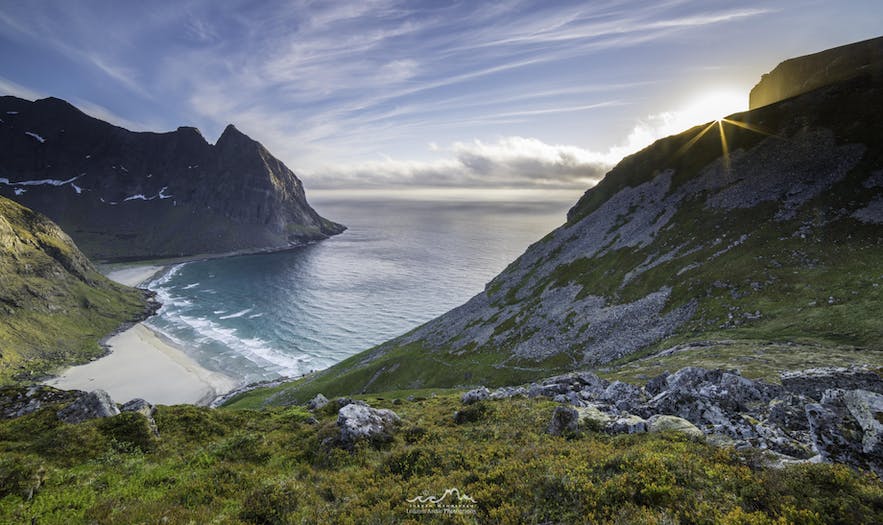 A great weather window was exactly what I needed to feel that it was worth the effort getting here in the strong and cold wind this evening. Half an hour later everything was covered in by fog and clouds...

Finally, I will recommend anyone who plans to visit the Arctic to carry enough clothes no matter what time of year the tour takes place. Especially in winter, this is important.

Likewise, it is important to take precautions if you wander off the marked trails, close to a stormy sea or snow-covered mountains in winter. Many places there can be dangers that you will not necessarily think of right away.

Every year there are several people getting killed by snow-avalanche. Every year, people get washed to sea by the one wave that was a lot bigger than the rest. And once in a while, there are some that fall off a mountain because they have been careless. It may be very risky to move on a steep cliff while looking through the viewfinder of a camera with wide angle lens. As the landscape seems further away, it can lead one to take the one step too far in the wrong direction ... 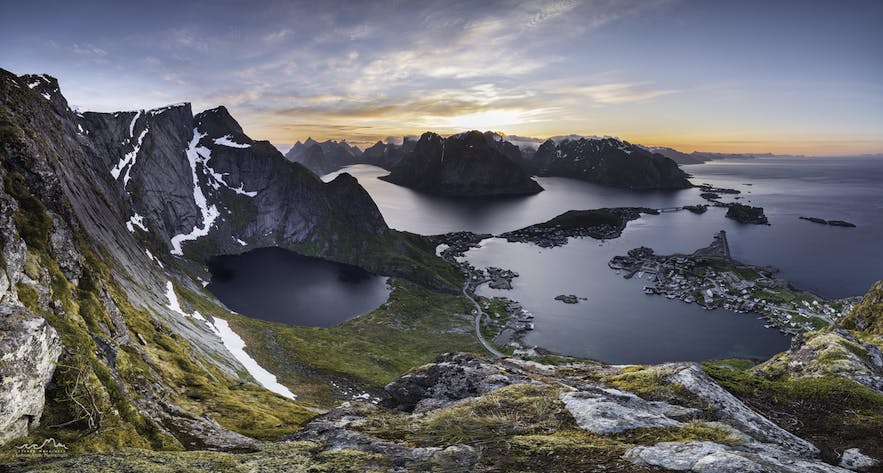 Reinebringen, above Reine village, offers you one of the most stunning views in the entire world. This location gets visited by several thousands of people every summer. The hike is steep and a bit dangerous, which means that you have to pay attention to every step you take, and be aware of loose rocks, especially those, set in motion by people above you.

With that said, I hope that you all get to experience at least some of what you have dreamed of while you visit Northern Norway. And do not hesitate to contact one of us locals if you have questions, concerns, or need some advice!