Bryggen Brings to Life the Hanseatic History of Bergen

Bergen has countless attractions and sights to keep a tourist occupied, but perhaps none are as famous and notable as the UNESCO World Heritage Site of Bryggen. Images of Bryggen come to mind when travellers envision the city, but why is Bryggen so important to the city of Bergen and Hanseatic Heritage as a whole? Continue reading to learn more about the history of Bryggen as well as what you can do there presently.

Travellers coming to Norway often have two images on Bergen in their heads. The first image is that of torrential rain and a person struggling to keep their umbrella from blowing inside out. The second image is that of Bryggen. The historic harbour district of Bryggen is teeming with history; so much that UNESCO declared it a World Heritage Site in 1979. Bryggen has endured several fires but has persevered and today is a highlight for anyone visiting the western Norwegian city of Bergen.

This article will time warp you into Bryggen’s Hanseatic history and then propel you into the future to see what Bryggen has to offer today for tourists visiting the alluring city of Bergen.

The history of Bryggen is a fascinating one. While there are traces of history in the area from before, the history that made the harbour famous began in 1350 when the Hanseatic League established their Northern European office there. Over time, the buildings were overtaken by Hanseatic merchants and were used to house stockfish from Northern Norway, along with some other goods coming up from Europe.

In 1702, the entire city of Bergen was disintegrated to ashes from a fire. Bryggen was destroyed completely and rebuilt. A lot of the buildings were later burned down again or destroyed.  Eventually, after 400 years in 1754, the Hanseatic operations in Bergen dissipated and the properties were turned over to Norwegian citizens.

Bryggen suffered another fire in 1955 that consequently led to a 13-year excavation of the area.  This excavation resulted in findings called the Bryggen Inscriptions, which are cited to be the most important runic find of the twentieth century.

The Bryggen Inscriptions are said to be the most important runic find of the twentieth century.  Runes are letters in a set of alphabets that were used to write Germanic languages before it adopted the Latin alphabet. Also called futhark, runes were used by people from Northern Europe, Great Britain, Scandinavia and Iceland for hundreds of years from the 3rd century all the way up to the 17th century.

The inscriptions found at Bryggen and various other places around Bergen were scribed mostly on pinewood and bone. They showcased everything from business letters to expressions of affection to vulgarities. Because of this find, it is has been accepted to assume that Runic was widespread and commonplace amongst the residents of Northern Europe. 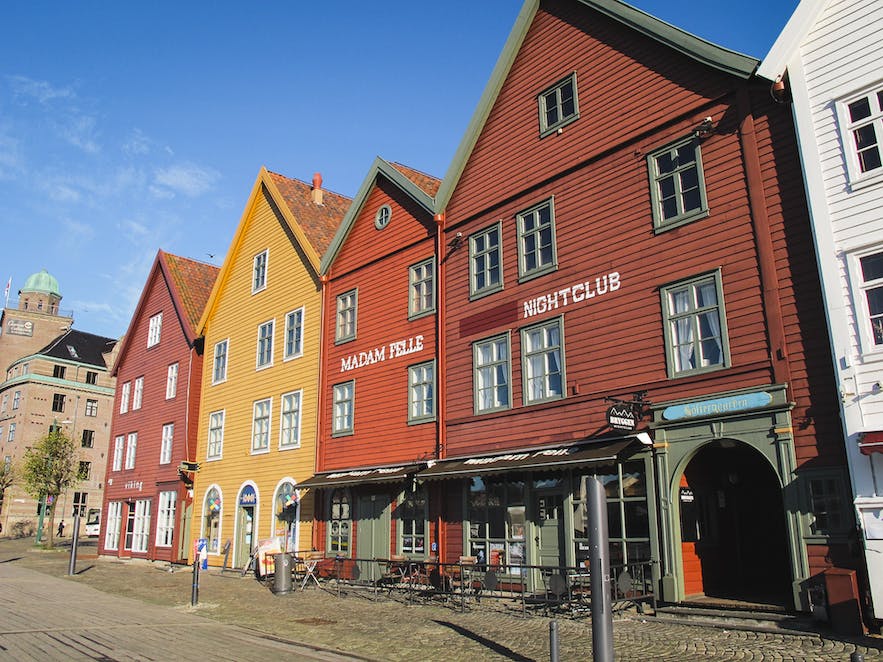 In 1979, Bryggen deservingly received UNESCO World Heritage status due to its importance and role played in Hanseatic history. In an effort to preserve the historic area, “The Bryggen Project” was established in 2000.  The project aims at restoring and keeping the harbour area safe.

Bryggen is privately owned and the Bryggen Foundation, which was founded in 1962, owns the majority of buildings. Protection from fires remains a major concern and many measures have been taken to ensure that the wooden buildings never succumb to history repeating itself.  Sustainability is also a key concern and these projects, foundations and UNESCO all make efforts to guarantee that Bryggen will be around for many years to come for the residents of Bergen and enthusiastic tourists to the city.

Currently, Bryggen is bustling and busy with a different kind of life.  It is the cultural epicentre of Bergen for locals and travellers alike. The harbour area, riddled with enthralling history, is progressing well into modern times and many buildings have been converted into pubs, restaurants, galleries, shops and museums. Events and festivals often take place in the area and along the eastern harbour of Vågen. While the history of Bryggen is what launched it into stardom, the culture and offerings that currently exist there are what keeps it at the top of many travellers’ bucket lists.

The number of buildings remaining is around 61 and they cover over 13,000 square metres in size. They were built wooden and remain that way to preserve history. The roofs were built with more durability, however, as a defence mechanism during WW2. Most importantly, these buildings symbolise the lifestyles and working routines of the German merchants who lived and worked in them. One of the most notable characteristics of Bryggen today is the long, narrow passages that run through it parallel to the docks. Businesses are flourishing there and tourism is booming in Norway these days, a sign that the country has endless options for the various kinds of tourism it receives. 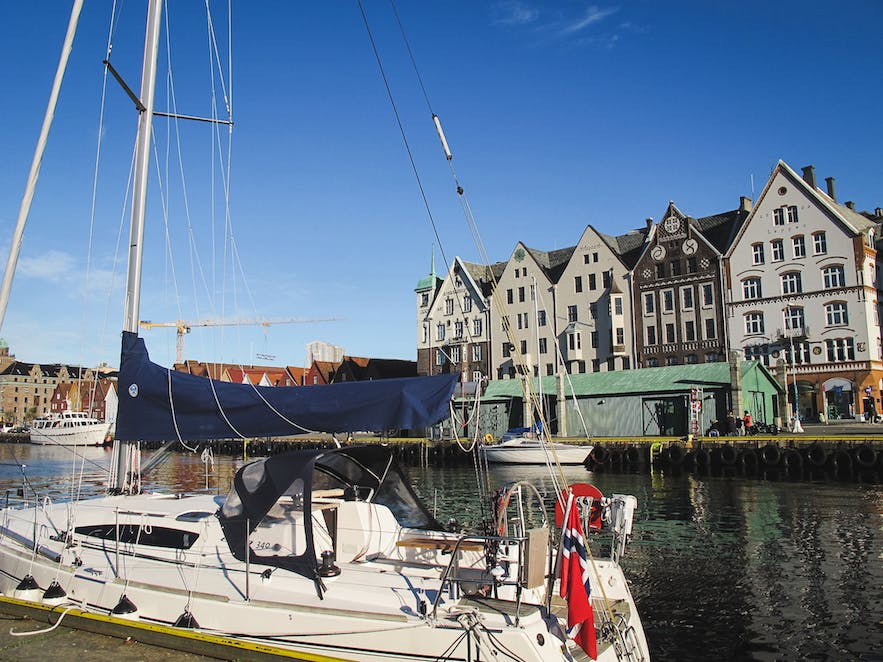 What to Do at Bryggen

Bryggen truly offers a little for every type of traveller. There are galleries, pubs, restaurants, speciality shops and museums. The following sections will discuss how to keep occupied and dig into some of the local history while at the harbour.

The Bryggen Museum is a museum that was built atop the ruins and remains of the first settlement there. With buildings dating back to the 12th century, one can observe the many archaeological findings in the ground that have been preserved. The museum also hosts temporary themed exhibitions and art displays. The Bryggen Museum is located at Dreggsalmenningen 3.

The Theta Museum takes visitors to a completely different era in history… one that is more recent and tangible. This museum educates entrants to see the history of the opposition in Norway during WW2. The Theta Group was founded in May 1940 with the mission to initiate radio contact between the British government and Norwegian opposition. The main office for these operations was in a small room in Enhjørningsgården at Bryggen. You can still find this office and museum behind Enhjørningsgården today and the office was reconstructed in 1981 after a mandate from the Directorate of Cultural Heritage (it had been destroyed by German troops in 1942).

The Bryggen Hanseatic Museum is a constant display of the Hansa way of life. The museum is actually pretty historical in its own right and was opened in 1872 so that visitors could explore the building that was built in 1704. Moreover, this building was the only one at Bryggen that has managed to keep and maintain the original interior. You can find the Hanseatic Museum at Finnegården 1a. On the other side of the road, you can find the old Hanseatic fish exchange called Schøtstuene which sits adjacent to St. Mary’s Church. Schøtstuene was also used as an assembly hall for the Hansa during the winter months and it also contains a cookhouse. 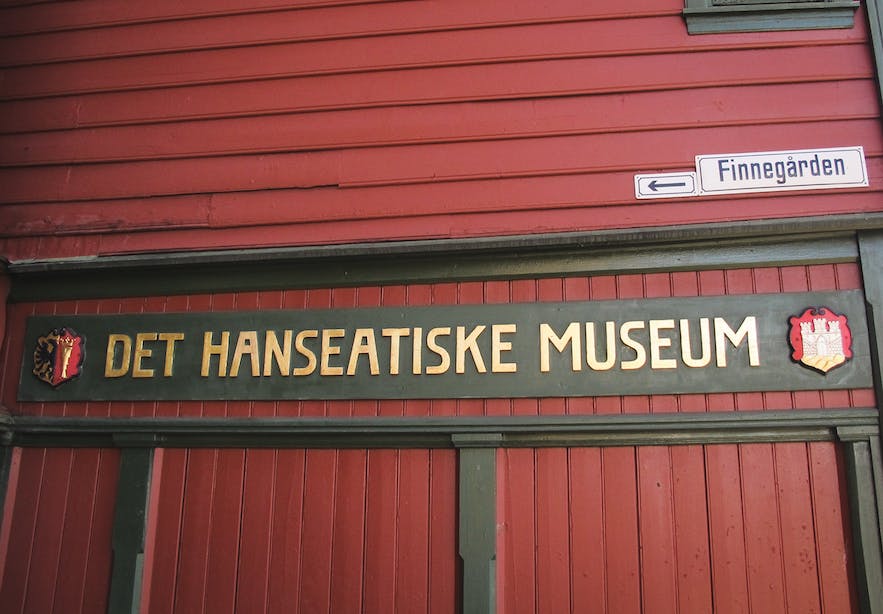 Where to Eat at Bryggen

To Kokker: Located at Enhjørningsgården 29, To Kokker (Two Chefs) has become a well-known Bergen establishment located right at Bryggen. The décor and atmosphere represent the harbour side’s Hanseatic history and the food is traditional Nordic fare with a modern twist. You can start your meal with elk Carpaccio followed by an oven-baked fillet of cod and finish it all off with a scrumptious cloudberry dessert. A true taste of the Nordics!

Sjøboden: Beer lovers can rejoice in knowing that they can take their pick among sixty unique beers at this well-known pub situated right at Bryggen. Sjøboden also caters to live music fans and has been a Bergen hub for artists for years. Entrance is free and the pub even has an outdoor space for the warmer months.

Bryggen Nightclub: The Bryggen Nightclub is Bergen’s largest nightclub by size and remains a popular party and entertainment spot in the city. They also regularly show live football games.

Where to Stay and Hotels at Bryggen

Det Hanseatiske Hotel: Ever dreamt of sleeping inside or at a UNESCO World Heritage Site?  Well, the opportunity is yours if you stay here. Located at Finnegården, guests will sleep among Hanseatic history in one of the 37 stylish rooms the hotel has to offer.

Thon Hotel Rosenkrantz: The Thon Hotel located at Bryggen caters to the business traveller or the traveller who simply wants comfort, modern, and practical. Equipped with Bose stereo systems in every room, guests can also expect to receive dinner included in the cost of their room.

Radisson Blu Royal Hotel: This Radisson Blu offers some of the most picturesque views of any of their hotels as it sits harbourside and in close proximity to Bergen’s major sites. 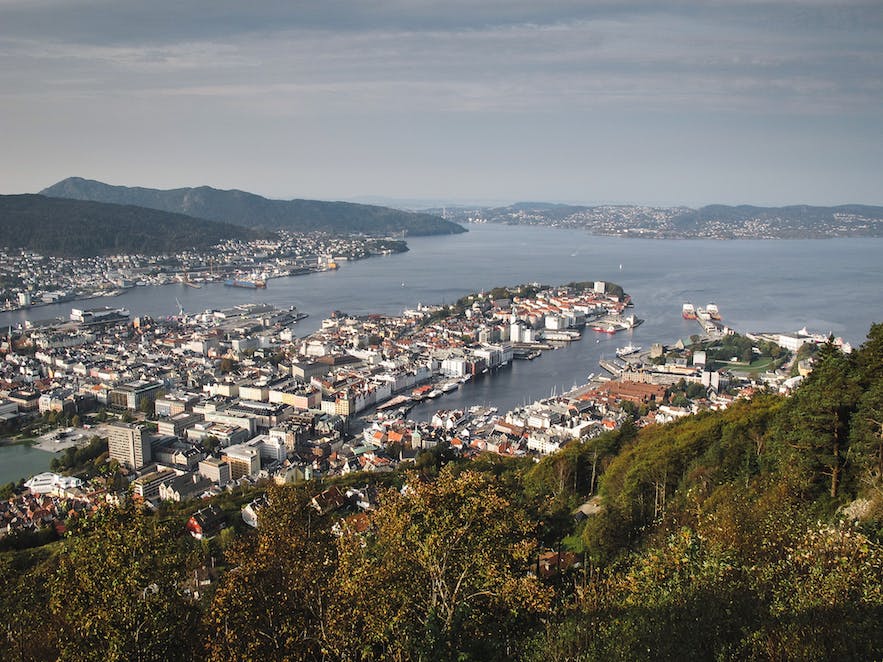 What to Do Close to Bryggen

Bryggen boasts such a vast variety to keep tourists busy, but within a short walking distance are some of Bergen’s best sights! You can’t stay at Bryggen without taking advantage of the following:

Bergen Fish Market: Just steps away from Bryggen sits the famous Bergen Fish Market, which has been in operation since the 1200s and used to act as a meeting place for merchants and fisherman. You can find the freshest of fish in the stalls here and it is definitely worth a stroll through it. The opening hours vary depending on the calendar year, but it traditionally opens at 0800 during summer months (7 days a week) and from 0900 during the colder months (closed Sundays).

Fløibanen: Bergen’s finest and most spectacular view can be seen by taking this funicular to the top of Fløyen, one of Bergen’s seven mountains. The Fløibanen opened in 1918 and serves over one million passengers on its five stops annually.

Bergenhus Fortress: One of Norway's best-preserved castles and fortresses happens to be a stone's throw away from Bryggen. Built in the 1240s, it still stands in excellent condition and remains one of Bergen's top tourist attractions.

What are you waiting for? Hanseatic history in Norway's charming west coast city awaits!