"Twilight Above Ålesund II"
Let us start the journey In Ålesund,
As you can see this city is a ocean city, with docks and "canals" through the city making several options. The Cruise ships usually dock to the left of the photo and then tourists join busses for city sightseeing or take buses to the famous Trollstigen Road and Romsdal Mountain and/or the famous fjord of Geiranger. However we are talking about the Islands which I favor.

Ålesund itself is an archipelago connected by bridges, towns from individual islands or mainland that eventually joined together to make the modern day city of Ålesund.
My adventure usually starts on the right port near to where you see the little lighthouse and the cranes making their rounds.
There are 3 passenger speedboats that dock there.
One for the touring campany 62° Nord, that shows the fjords surrounds Ålesund,
One is called the Espressen which goes to Hareid pretty much every hour and offers Wifi. A very cute town however I don't have a photo of it. Runde which is visible right in the middle of the frame is farther away and very impractical to visit by public transport, though possible, via the speedboat and bus. The island has very nice nature a cozy and beautiful lighthouse (Runde Fyr) which you can overnight in. However the website is in mostly in norwegian so you can go to a tourist office which is easy enough to find in the city sentrum and get more information about it. The island is also very well known for its bird life where birds migrate in large groups every year to mate and hatch their chicks. The Espressen also visits a nearby island called Valderøya which is to the right, right outside of this frame. It is also connected by a set of two tunnels that go below the fjord. On that Island there is a short hike up the Hill which also includes a large Ocean Cave that many like to explore, It is part of the Kommune of Giske, which consists of the Islands, Vigra (where the Airport is) and lots of great compositions for photography there. Valderøya as mentioned before, Giske (where the annual Sommerfesten is hosted). And then there is Godøya which is a little to the right from the center of the frame. Which is connected by tunnel rather than bridges like the rest of the archipelago.
For many in Ålesund, Godøya is the manifestation of heaven on Earth.
The main gem is the Lighthouse which If I understand right is the most Photographed Lighthouse in Norway. 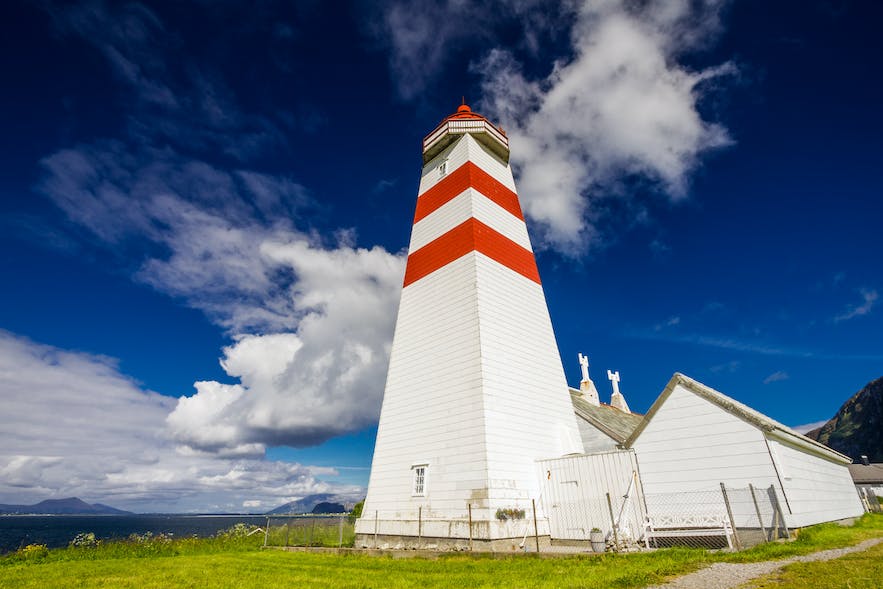 "The Lighthouse of Alnes with Wings"
On the other side of the island there is Smaller quaint, but very nice lighthouse on a long pier/breaker.
here is another composition of the same lighthouse. 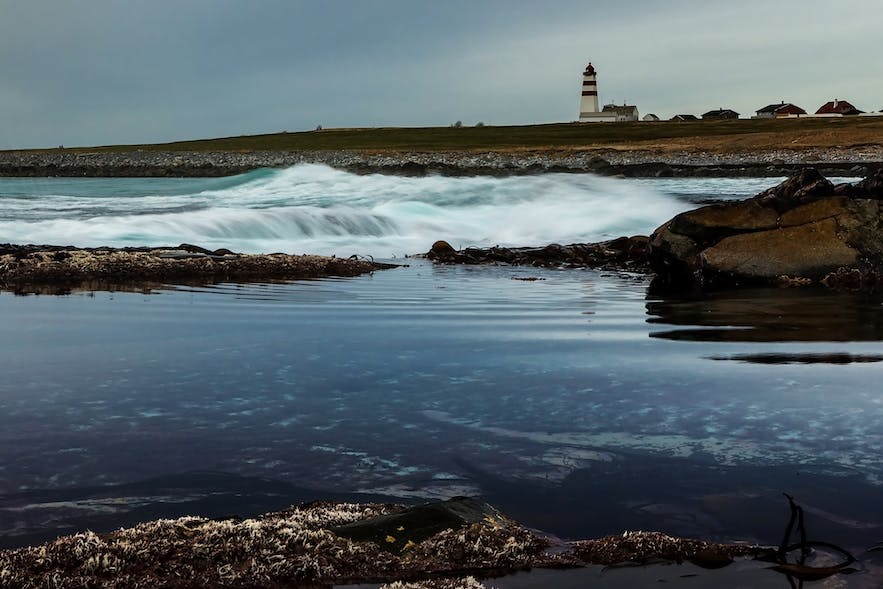 HQ available https://500px.com/photo/104392521/
Alnes also has one of the nicer beaches in the area, providing nice sand, rocks and boulders giving nice compositions and good surf on a day with a bit of wing. 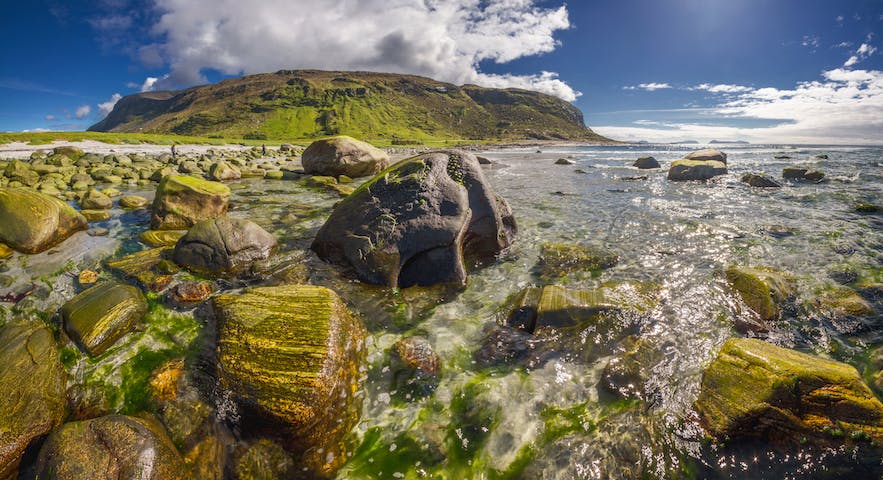 Many come here to take a selfie, parturition the well known rock Johan Stick sticking off the Cliff of this mountain. With a nice view of the town of Alnes, with a good angle for getting some colors in the water. 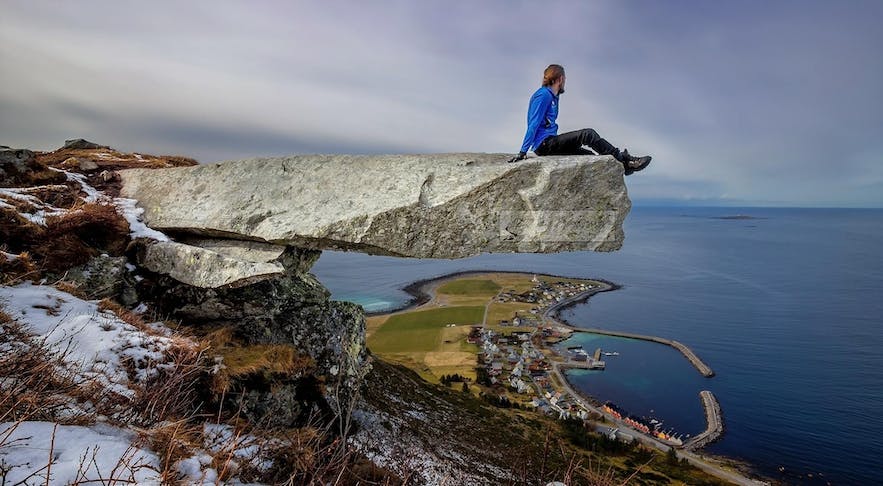 "No Danger"
and if you do not dare get into this position there is the classic standing on the edge of the cliff with the good view. 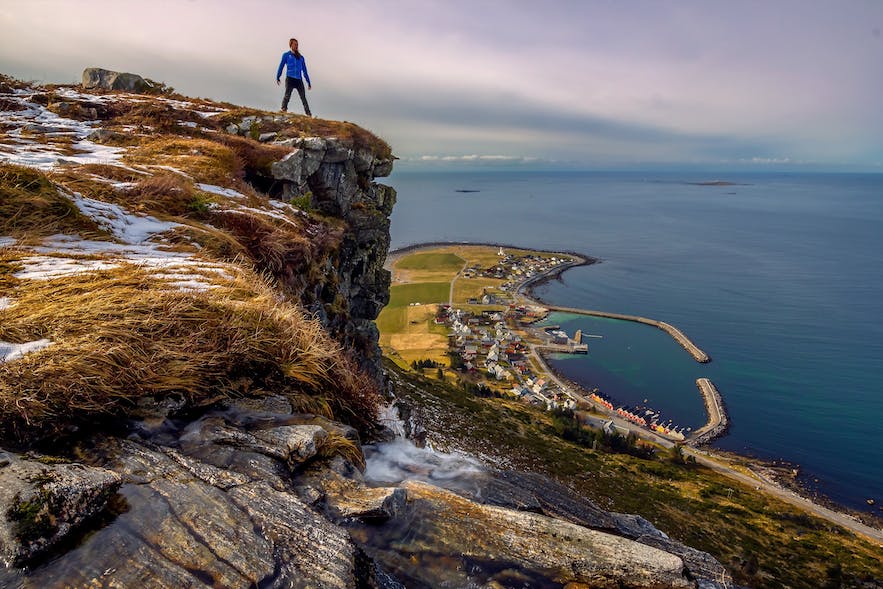 Two of my favorite photographers from the area have great portfolios showcasing the area, so I recommend you taking a look at their work to see what other options there are for photography. Ruben Molnes and Stian Rekdal
Ruben Molnes lives in the area and takes stunning images of some of the treasures in the area. Who also got some shots of Runde the island with birds.
While Stian Rekdal is from here but has moved to Greece and is an international Timelapse Photographer, and you should definitely check his timelapses, "Norway", "Encounters" and "Lys:Ålesund" which all includes some spectacular images of the area.

Also Check out Hanne Marthe's article, a fellow Travel Norway Guide "Connect with a local" wrote about this island. So another great article with information about Godøya,

That is Giske Kommune, next I will bring you to haram Kommune's Nordøyene the name for their cluster of islands.
the trip starts In Ålesund at the same place where the Espressen leaves for Valerdøya, and Hareid.
This Boat is called the Tidelyn a bit smaller and visits a very small island called Store Kalvøy which has 10-20 people that live there year round. And then goes further to Hamsund where I get off, to my town Søvik.

"My town in Winter"
This is where I have enjoyed living this past year very much.
And From this town and the nearby islands I have great views of the coast and the mountains and islands in the area. making a barrier against the ocean. My town seems to have the best weather in all the surrounding area, this whole place can be covered in fog as well as Ålesund and the neighboring areas while my small town of of 800 people is clear and surrounded by a wall of fog, we also escape a lot more rain, as well as snow (mixed feelings about that last one).

This little island is small and has a some wildlife and lots of great options for photography, dark enough for shots of Northern Lights, the Milky Way, and lots of great rock formations, waves, WWII bunkers and nature. But I'll write another article on this hidden gem.

Lepsøya is the island known for Caves, there is some great caves right by the tide pools right down to the ocean, and caves up high and in various shapes, here is the largest one on the island as well as the largest in area, and according to the sign, the largest ocean cave in Scandinavia, called Rønstadhellaren. Very close to the island of Vigra which has the airport, but you need to take the ferry to the mainland, around the fjord, though two tunnels to get to Vigra. This takes 1,5 hours or 2 hours, though a straight drive would take 10 minutes. 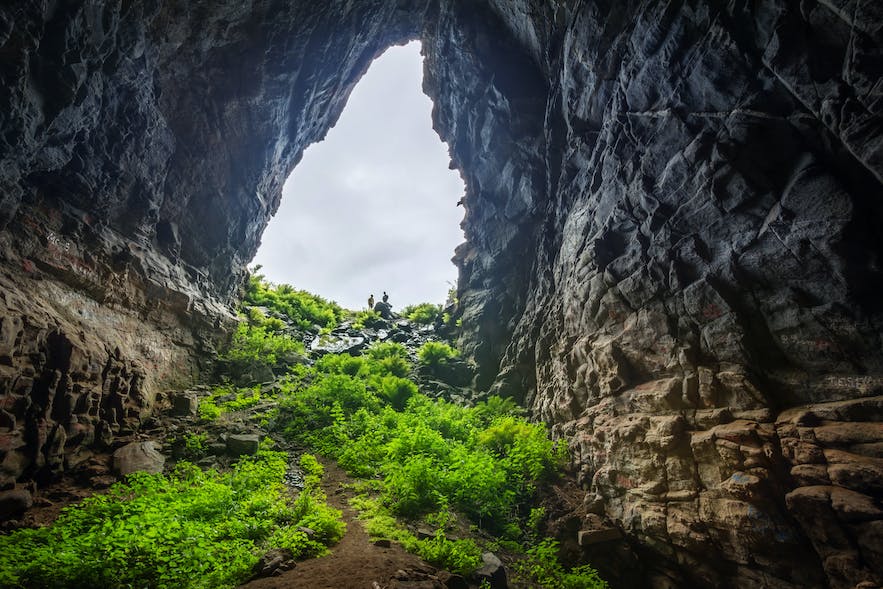 You can see Vigra, Godøya and the rocks out on the ocean that got several Lighthouses from the entrance of the cave. Sprinkling rainy and windy days shouldn't stop a trip. because it can give great results because they can bring some waves, a different look than perfect sunny days, drama to the sky, shiny surfaces, atompshere and a mood and if the light is right, some rainbows. 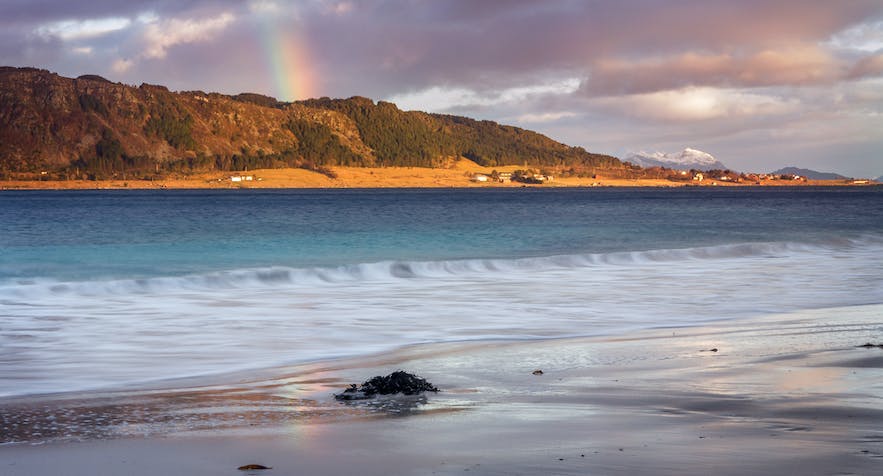 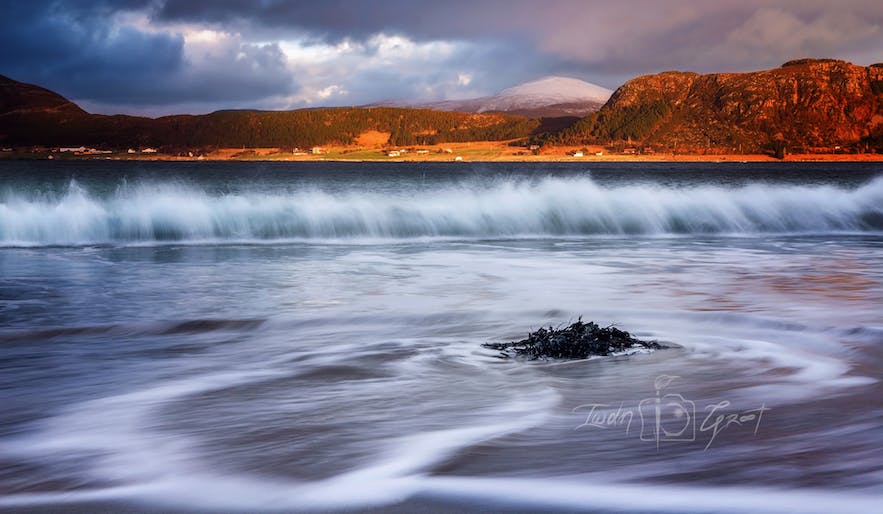 "Colorful Dusk"
Trying to get a perfect wave for your shot might take some time, for this scene I used a Intervalometer and let the camera keep capturing shots until I caught a wave I liked. Getting the right exposure; I make sure there is very little or no complete whites in the exposure histogram. And to add depth of field always try to get an element in the foreground so that the eye will be drawn from the foreground to the middle ground and background in the distance. Always wait for the sun to be low to get the dramatic light that makes your landscapes pop. The camera is maybe the least important spend money on a sturdy tripod and quality lenses to get sharp results so you can open up the exposure shutter speed and keep low ISOs. 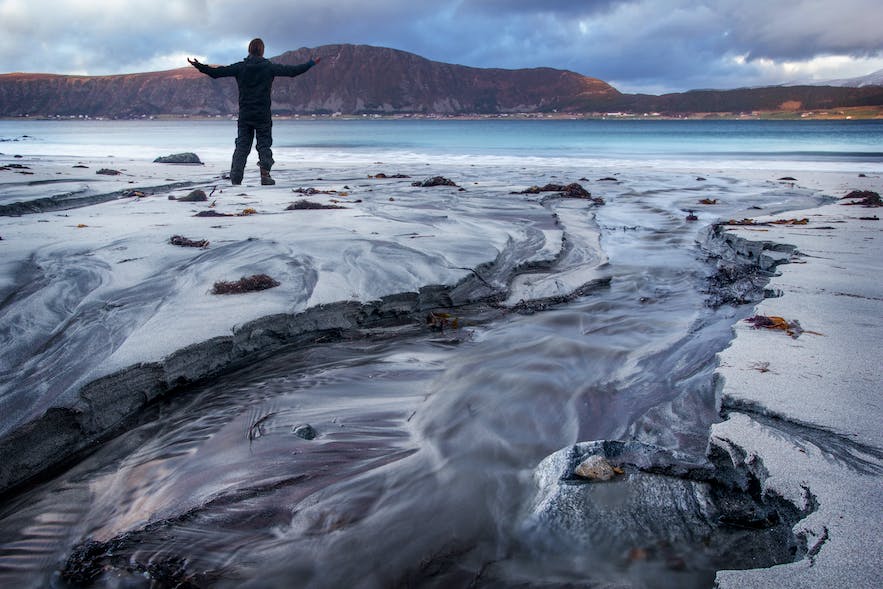 "Kjærstadsanden"
to get the nice details and get a unique perspective make sure you get low and capture details that when standing up you usually dont get to see. 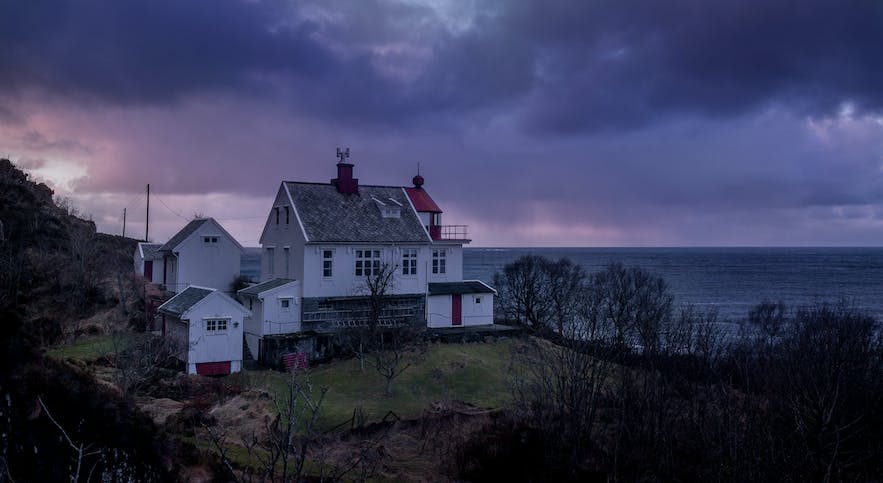 "Hellevika of Lepsøya"
A beautiful lighthouse no longer lit is more of a cabin that you can overnight in. Hidden behind the hillside this is truly a hidden gem of nice achitecture out in the middle of nature. Crashing waves below at the base of the cliff, and a great view of the open ocean. 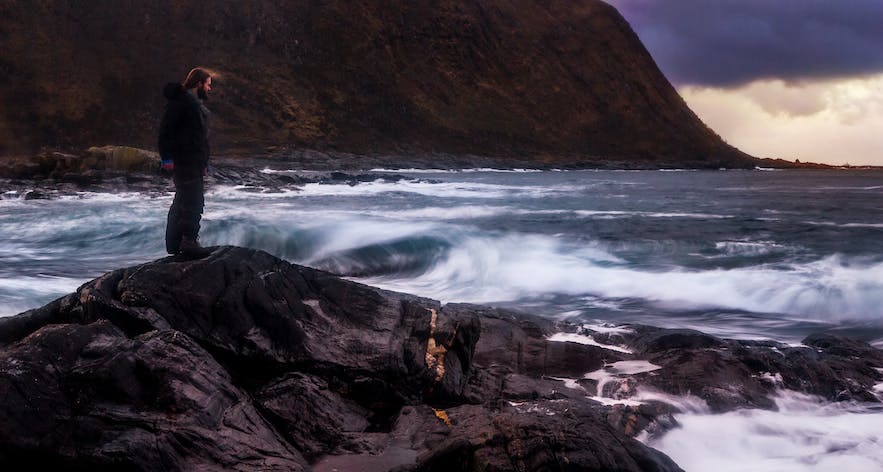 and down by the rocks on a windy day you can get some nice waves. 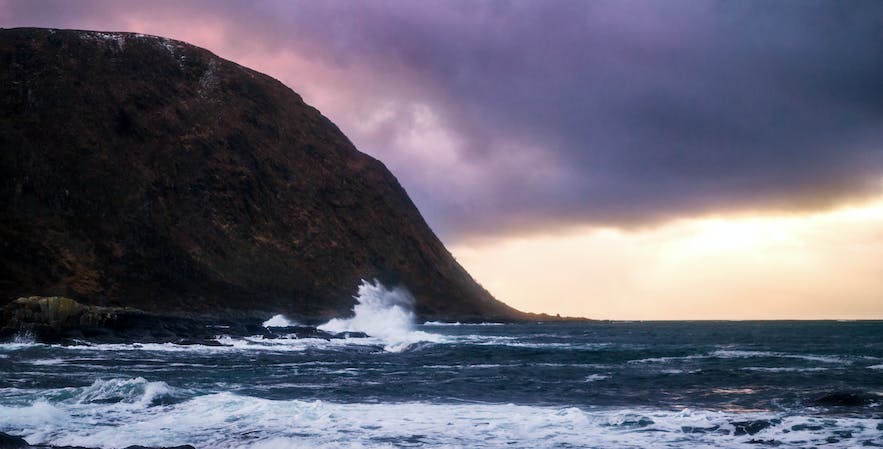 with long exposures of short exposures and get explosions of water and beautiful sunset over the open ocean away from all civilization. Gives a lot of opportunities for creativity and photographic styles on the telephoto, wide angle, details on the textures, tide pools, receding waters, wildlife and clouds.