The Hardanger district rings out like a romantic dream for many Norwegians. Very often the word "Hardanger" is followed by "blossom", and most people think of a green fjord landscape with beautiful orchards below snow-capped mountains. This is of course a good reason why Hardanger is one of Norway´s primary travel destinations. 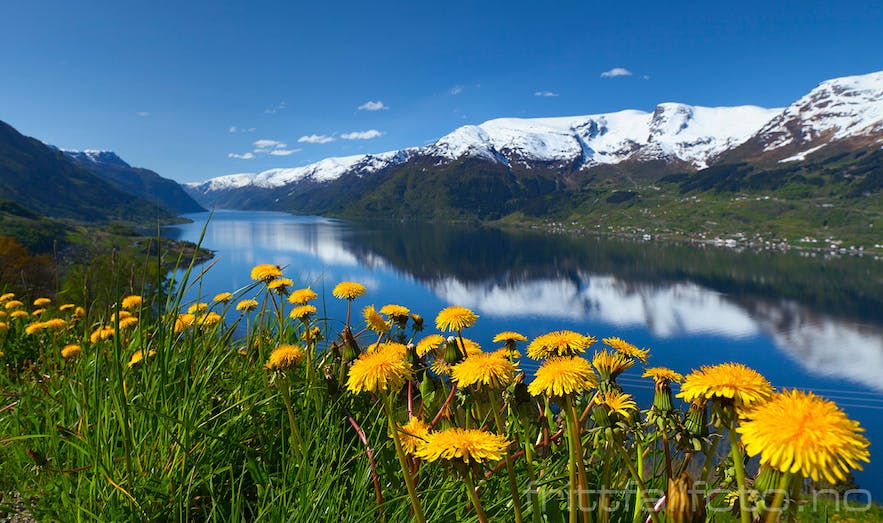 The Hardanger fjord stretches from the coastline to Odda at the inner reaches of Sørfjorden, a southward directed side fjord. This covers a distance of more than 180 km, but there are several other side fjords. One of them is Eidfjorden which continues into Simadalsfjorden, both carved into the Hardangevidda plateau described later. 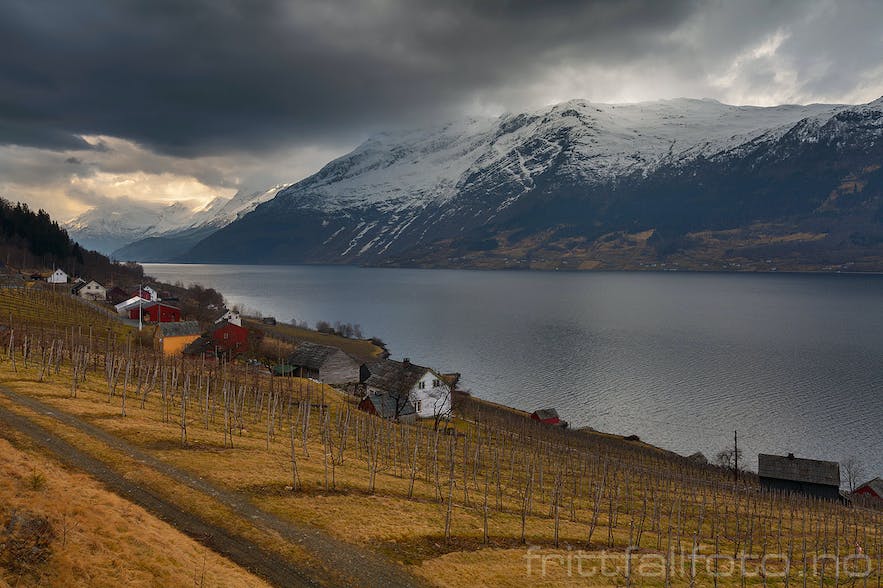 Seven municipalities make the Hardanger district, which is located around the inner half of the fjord system. Here the mountains rise high and steep, leaving only a narrow strip of farmland along the shores. On the western side of Sørfjorden, the glacier Folgefonna keeps the mountains white all year round. 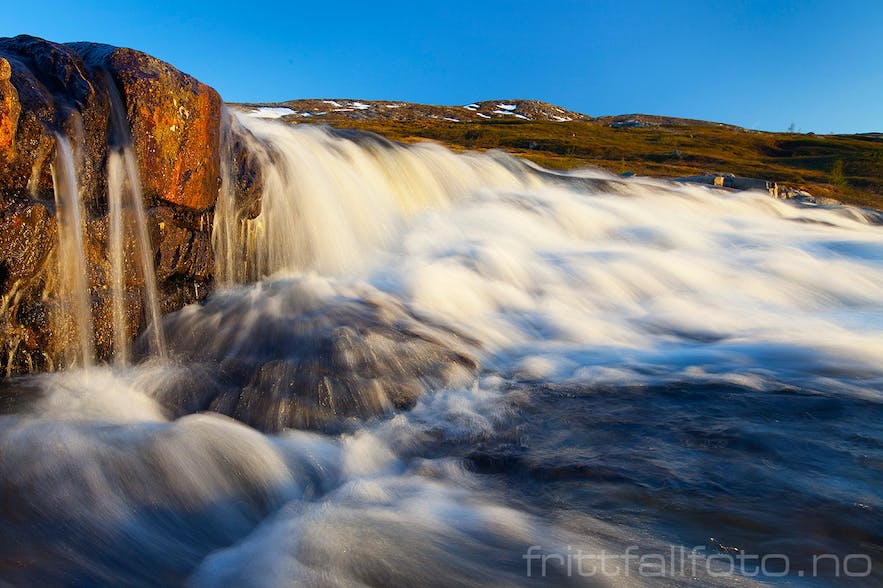 East of the fjord, in an average elevation of 1100 m, the Hardangervidda plateau covers a vast peneplain. In fact, it is the largest in Europe, covering 6500 square km. Home to wild reindeer, and used by many for hiking or skiing, hunting and fishing throughout the year. 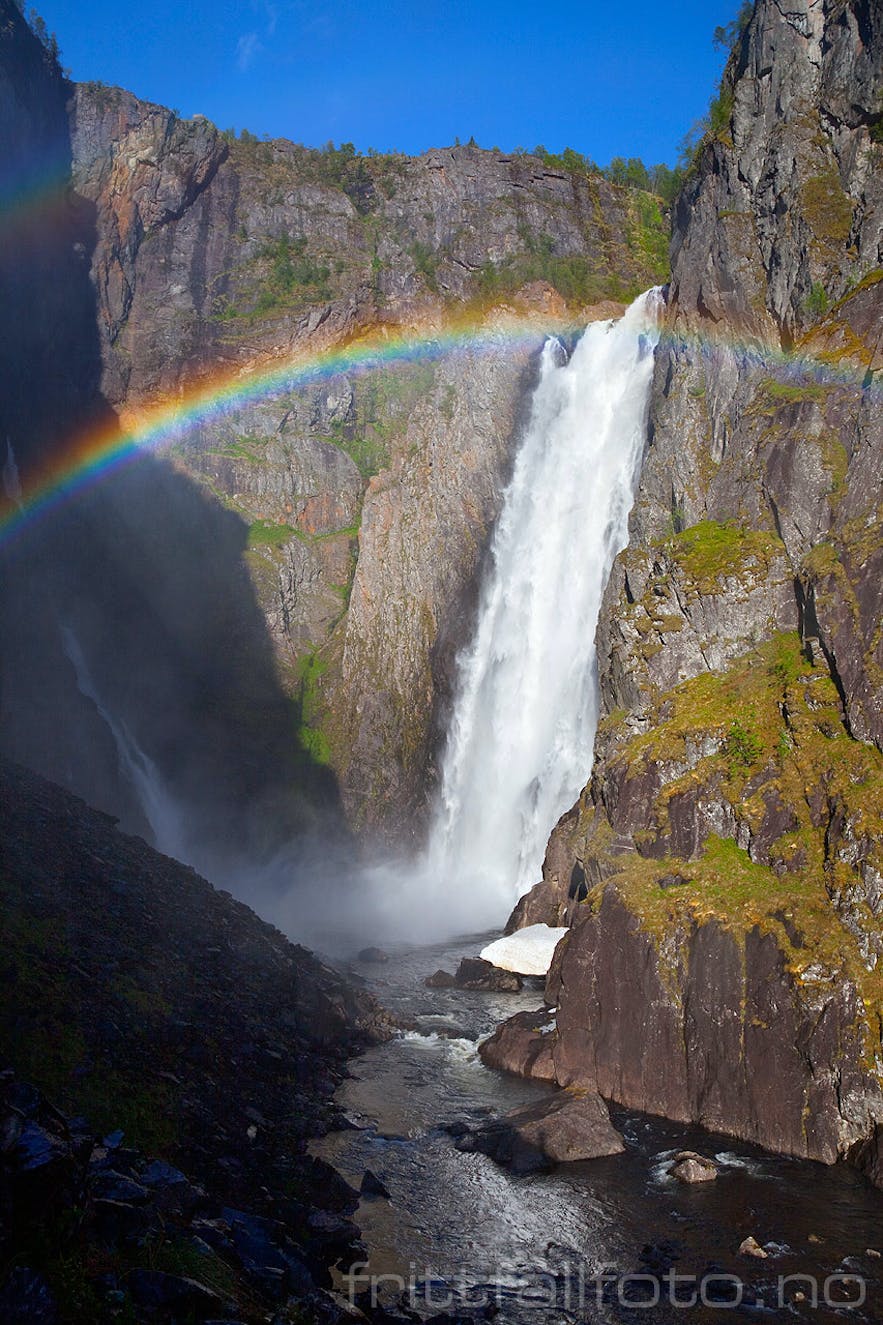 Several rivers and streams originate from the Folgefonna glacier and the Hardangervidda plateau, creating numerous high waterfalls on their way to the fjord. Some of Norway´s highest and most beautiful falls reside in this area. Vøringsfossen in Eidfjord and Låtefoss near Odda are the most famous, but there are lots of others well worth a visit. 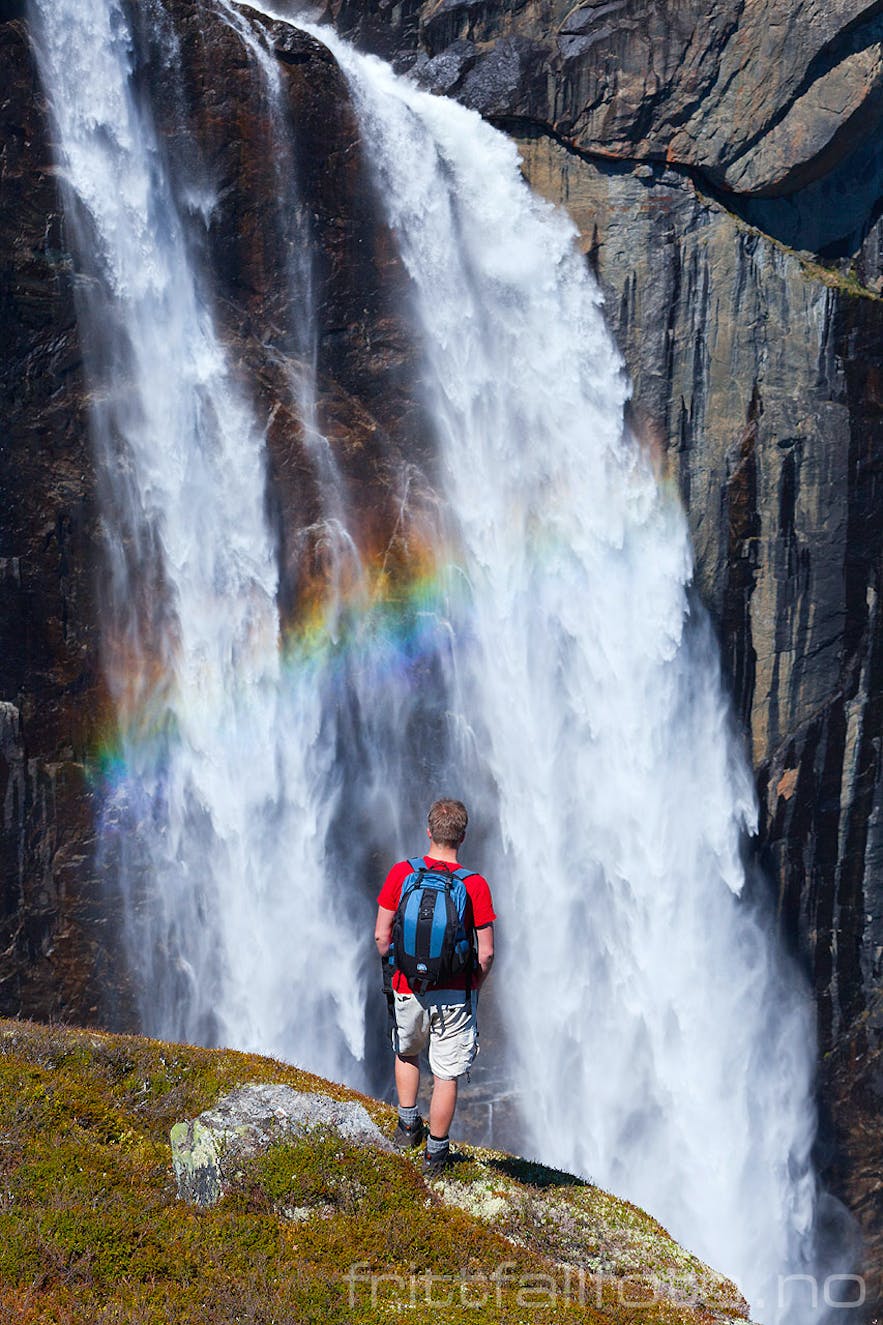 One of these is the Vedalsfossen waterfall in the valley of Hjølmodalen near Eidfjord. It can be seen from the road in the bottom of the deep valley. Well, it's rather a gigantic gorge. But the best view is from the top of the falls, where the river suddenly drops 200 m straight down. However, it requires a 10 km hike to reach this spot. Not to forget the 10 km hike back again. Only a part of the hike is marked, so you will have to navigate through the terrain yourself. 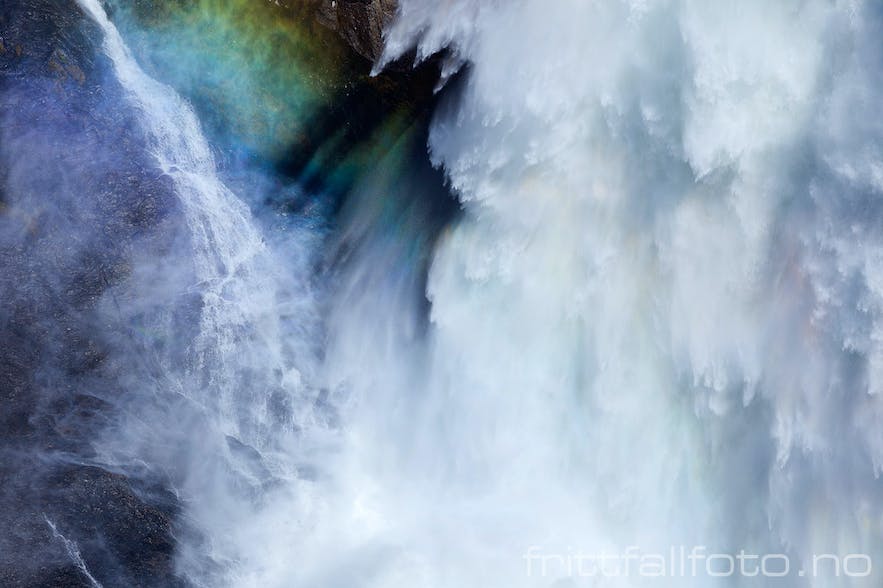 Along the way you can also see the huge Valurfossen falls, where the river Veig thunders down from the plateau and into the valley. In springtime, when the snow on the Hardangervidda is melting, you can feel the ground vibrating from the cascades of water crashing into the cliffs below. 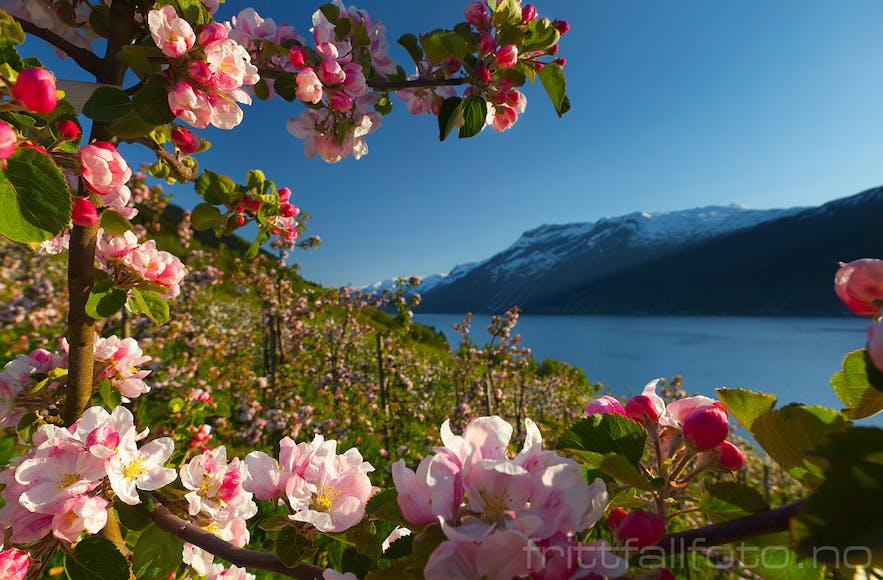 One of the main features of Hardanger is the many orchards clinging to green pastures along the fjord shores. Through mid-may the apple trees usually are in blossom, cherries somewhat earlier. But this can vary according to the temperature conditions during springtime. Traveling along Sørfjorden a sunny day this time of the year can be a very lovely journey. An example: Park your car at the Lofthus quay, and walk the upper roads through the village.

Buy an ice cream, and sit down in the green grass among the fruit trees in blossom, overlooking the fjord and snowy mountains. This will guarantee a scene of insane beauty, so if you can't calm down in this setting, I'm afraid you're a lost case. 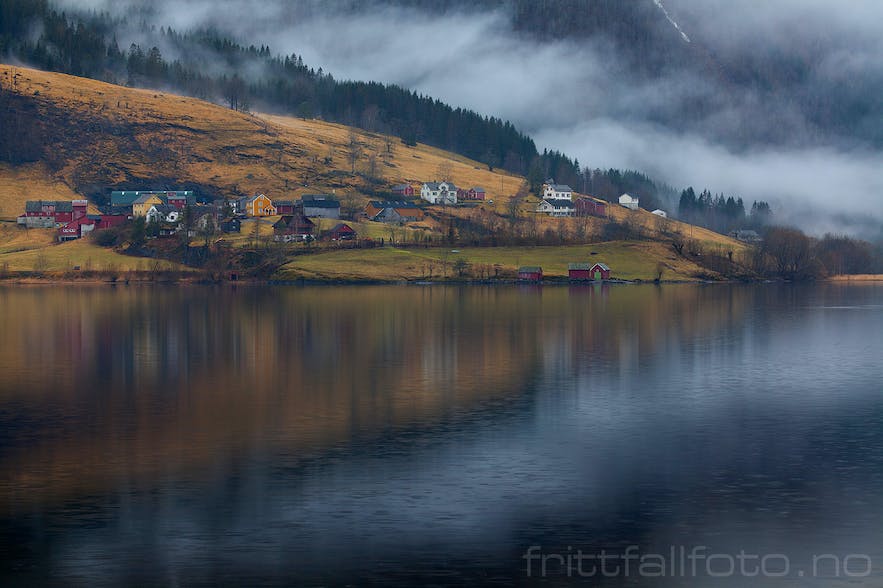 Most tourist destinations are flashing photos of their attractions taken during sunny and cloud-free conditions. This is not at all the correct picture every day. Far from it. Southern and western winds are the dominant directions on Norway´s western coast, and this often brings heavy clouds and rain to this part of our country. So if you want the postcard perfect experience, be sure to check the weather forecast. If you plan your trip weeks in advance, you'll have to stick with the conditions at hand, hoping for the best like anywhere else. 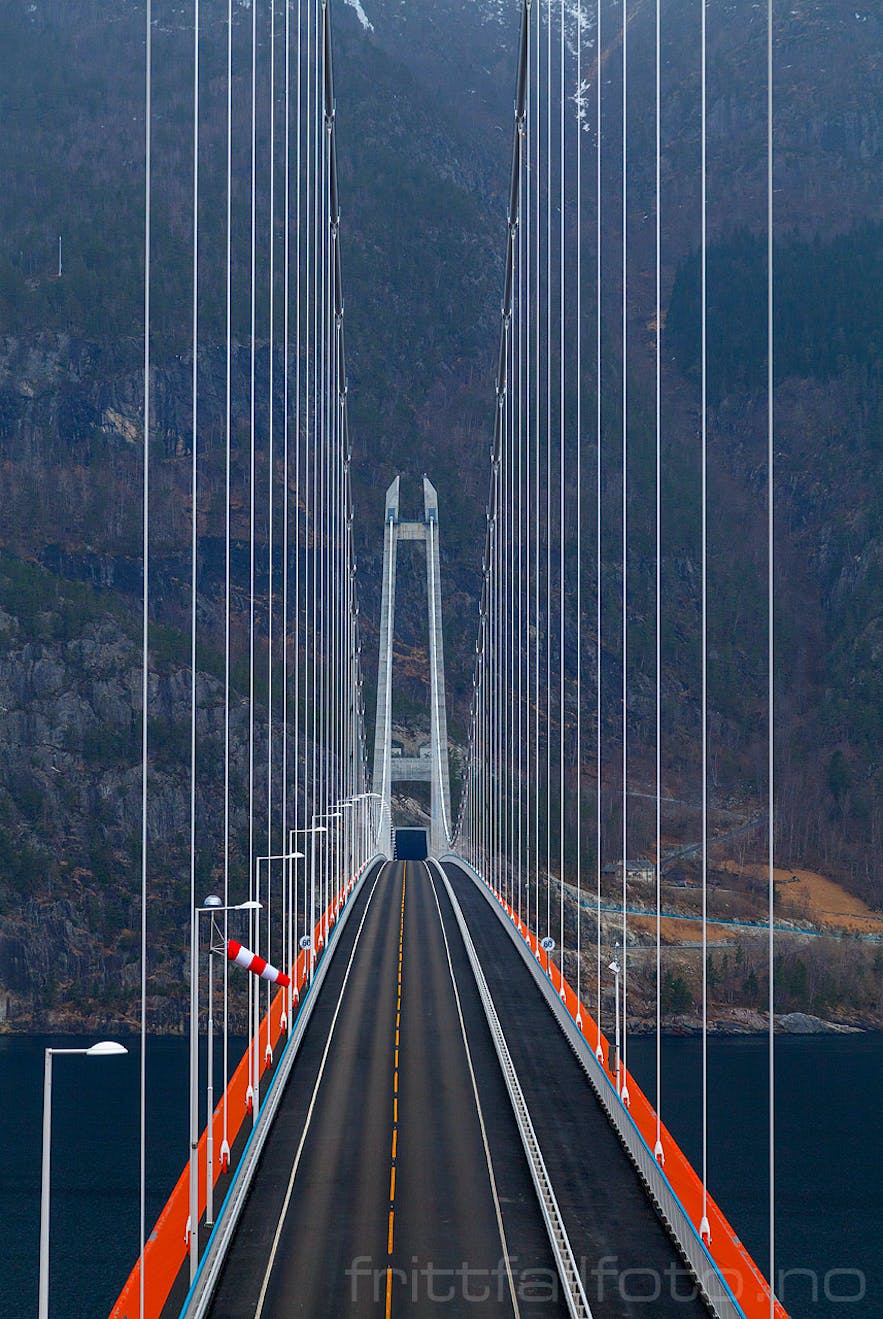 Roads run along most of the fjords at both sides, so the area is easily accessible by bus or car. Bergen is the closest city of some size, and you can reach the Hardanger area by road or boat. Rv 13 is a main road running in north-south direction through the district, and rv 7 is another running east-west. Both cross the fjord on the Hardanger bridge, opened in 2013. The bridge has a length of 1380 m, which makes it the longest in Norway and among the 10 longest in the world. 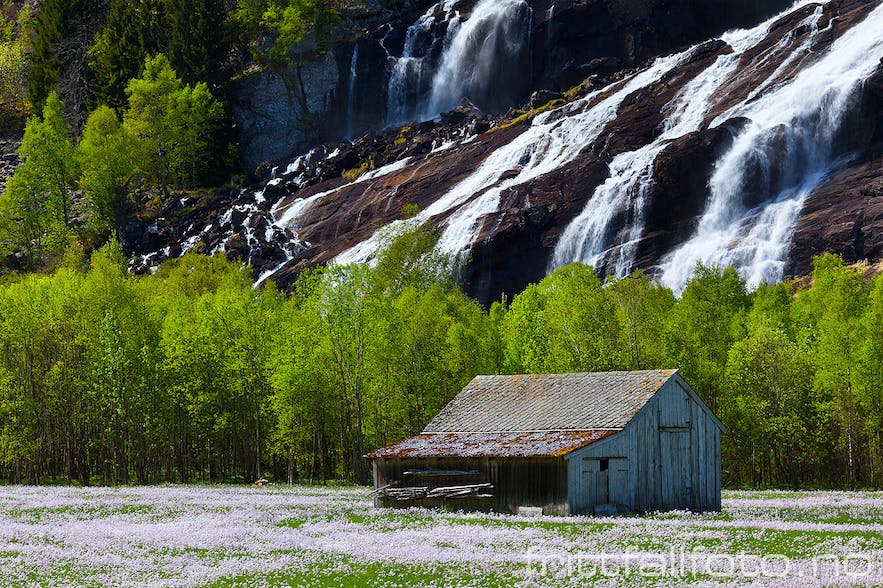 Many attractions is located directly along the roads, so you should have no problem finding sites to see. Roads literally runs across waterfalls like Vøringsfossen and Låtefoss, and through small and beautiful villages on the fjord shores. And you are very much welcome to Norway´s orchard! 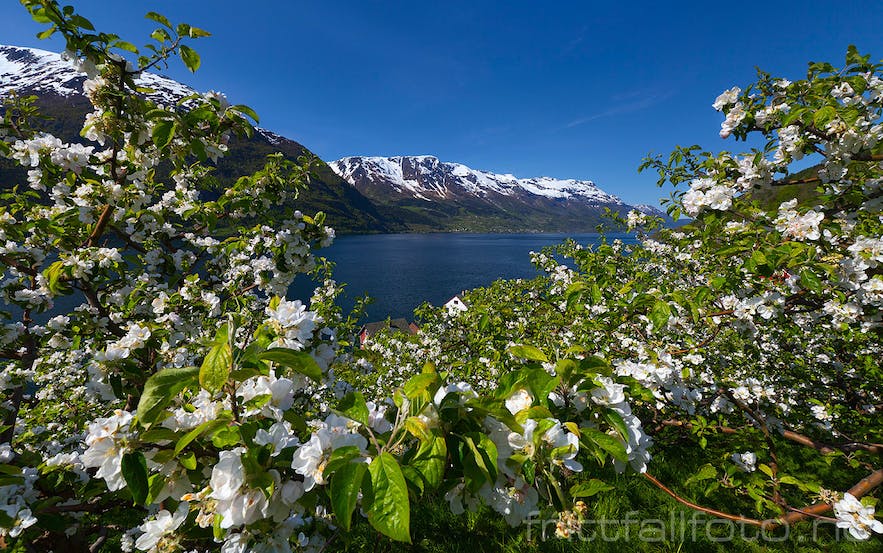