The Troll Wall in Romsdalen

Old. Grey. Hairy. Trees growing on their heads. Yes, they are everywhere, yet nowhere to be seen. Or...? In Norwegian folklore the trolls keep their spot on the centre stage, and they play an important role in our travels. Souvenir shops are even full of them. You can buy little figurines, postcards and any item you can think of with a troll theme. And every tiny little part of the country has some place named after them; troll mountain, troll valley, troll bay, you name it.... But there is only one Troll Wall.

Ten thousand years ago, the latest ice age ended, and revealed a landscape shaped by the enormous power of glaciers. Western Norway displays a magnificent example of these gigantic geological processes. Like the rest of Norway, it was shaped during several ice ages, which carved out the deep valleys and fjords we see today.

Towering mountains with snow on top loom over the green and lush landscape below them. Many places in Norway the mountains take spectacular shapes, but along the Romsdalen valley, nature took it to the extremes. 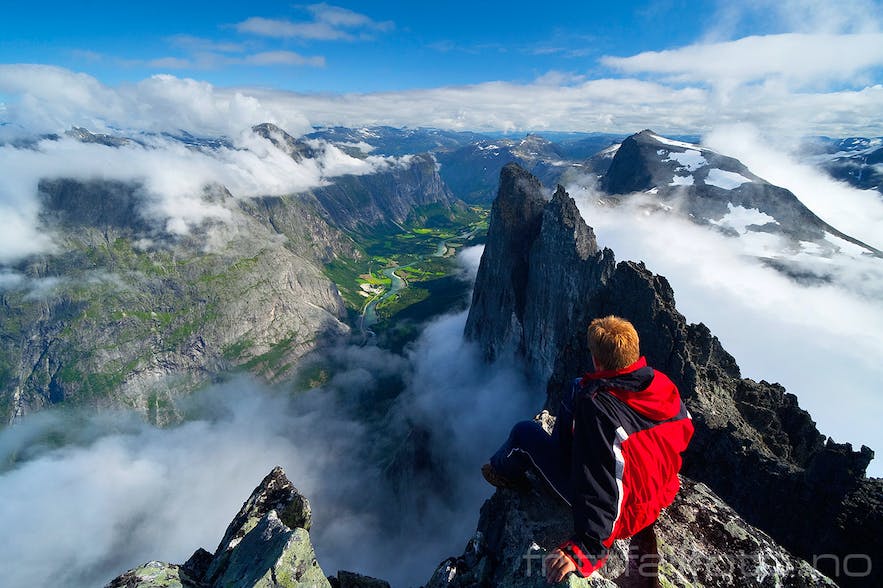 The highest vertical cliffs in Europe

On the western side of the valley, a few kilometres south of Åndalsnes, a humongous vertical stone wall stands on top of a 700 m high rock scree. The wall features a vertical drop of more than 1000 m, which makes it the highest of its kind in Europe.

On top of it, there are sharp and slender rock formations, balancing on the edge. These are the trolls who didn't make it home before sunrise, thus turned to stone. At least according to local folklore. That's why these spires are called Trolltindan (the Troll peaks), and the rock wall is named Trollveggen (the Troll Wall). 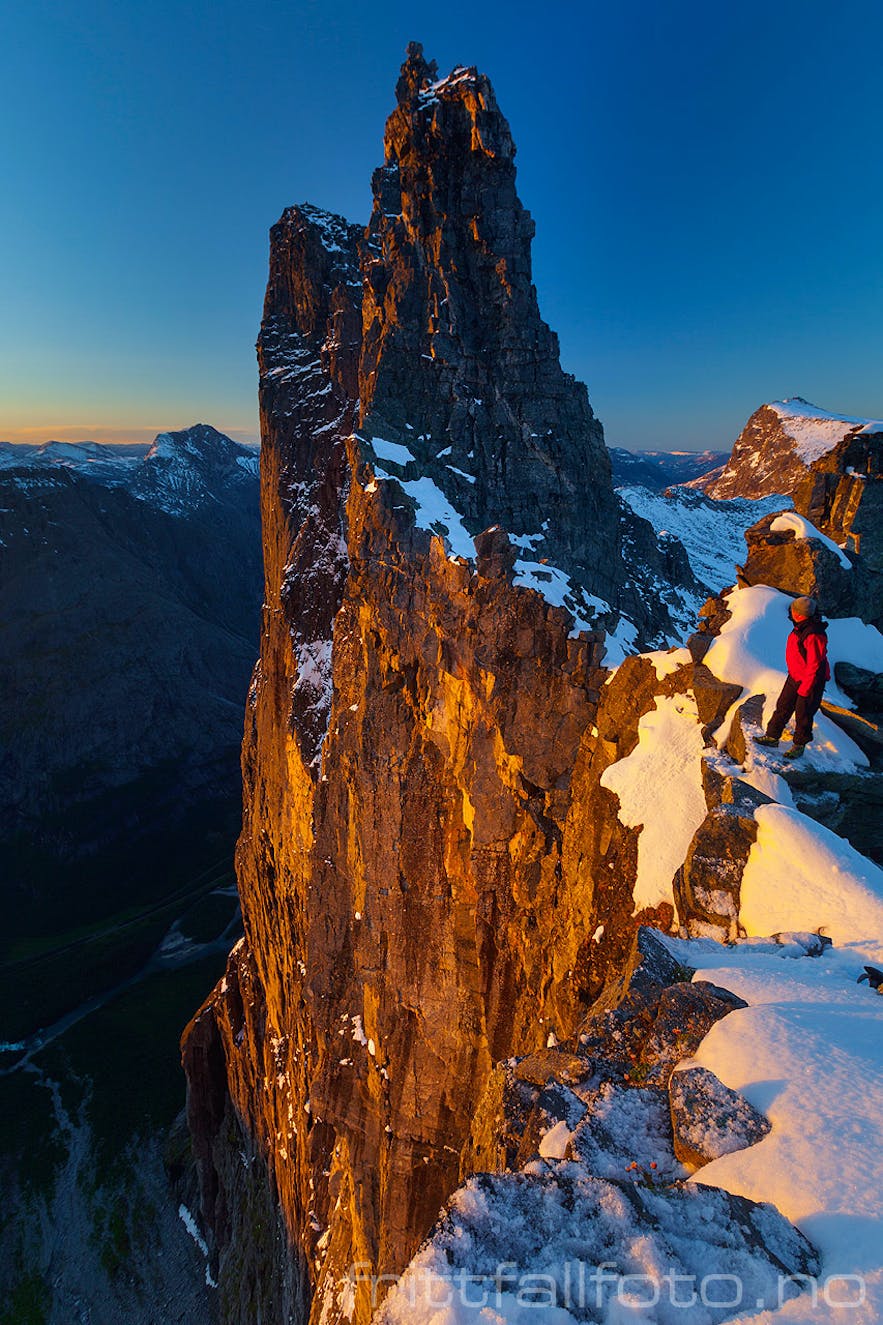 The landscape of Romsdalen has drawn travellers from the beginning of tourism. English aristocrats came to the valley for salmon fishing in the Rauma river, one of the best in Norway. Later foreign alpine climbers discovered the area.

However, the most famous tourist was perhaps the german emperor Vilhelm II. Each summer for several years before World War I, he returned to the Romsdalen valley. Sitting at the porch of Horgheim Hotel, he was gazing at the Troll Wall peaks and spires for hours on end. 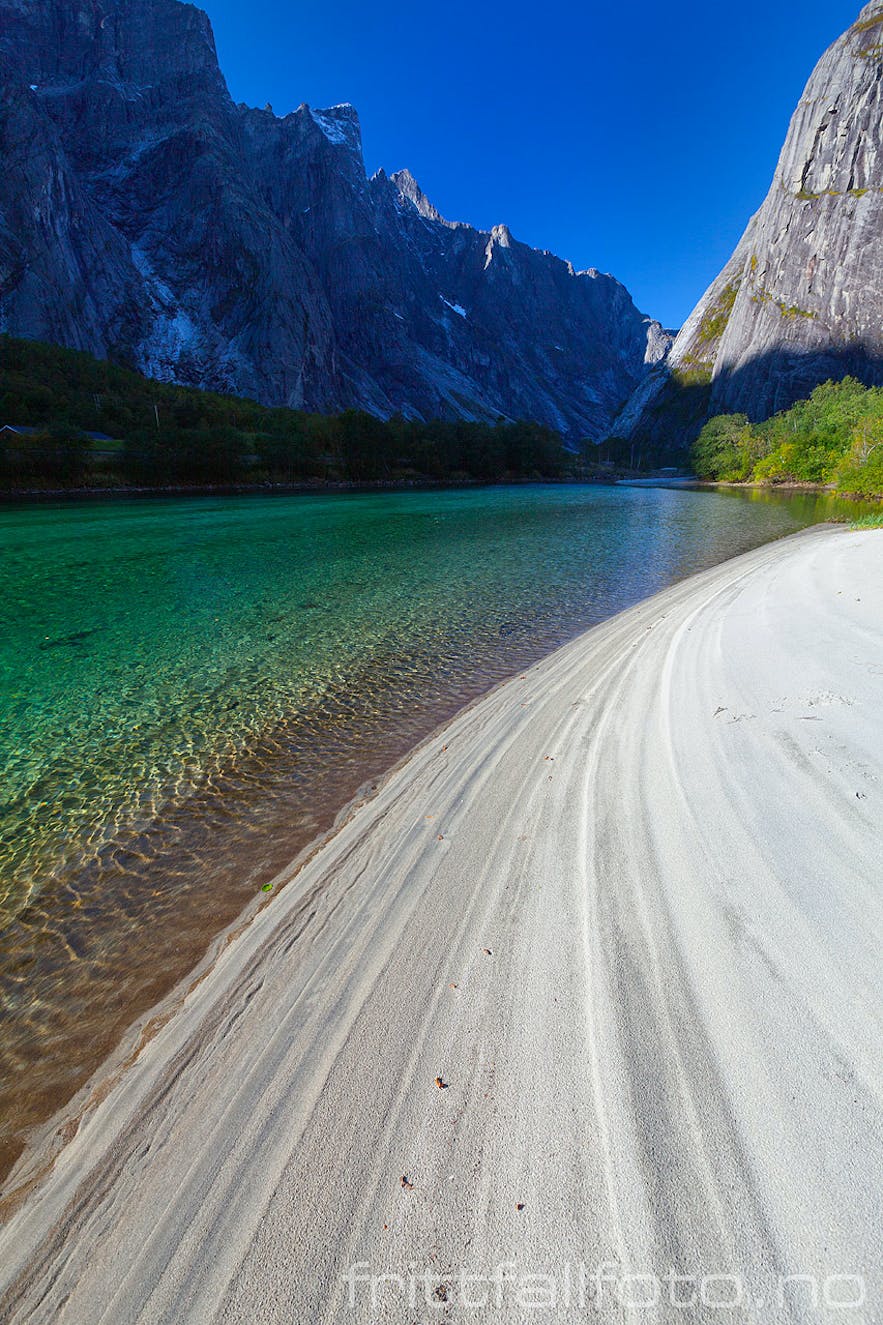 In 1965 the Troll Wall was climbed for the first time. A Norwegian and a British team climbed the mountains simultaneously, topping out a day apart, after two weeks in the vertical wall. Since then the area has been a popular site, being the ultimate climbing test in Norway.

But the Troll Wall is a dangerous place, plagued by frequent rock falls. After several almost kamikaze rescue operations, it is now prohibited flying a helicopter close to the wall, making a rescue impossible from most of the wall. So if you plan to attempt a climb here, accept the fact that the mountain is very likely to become your grave if you make a mistake. It would be a large tombstone, though. 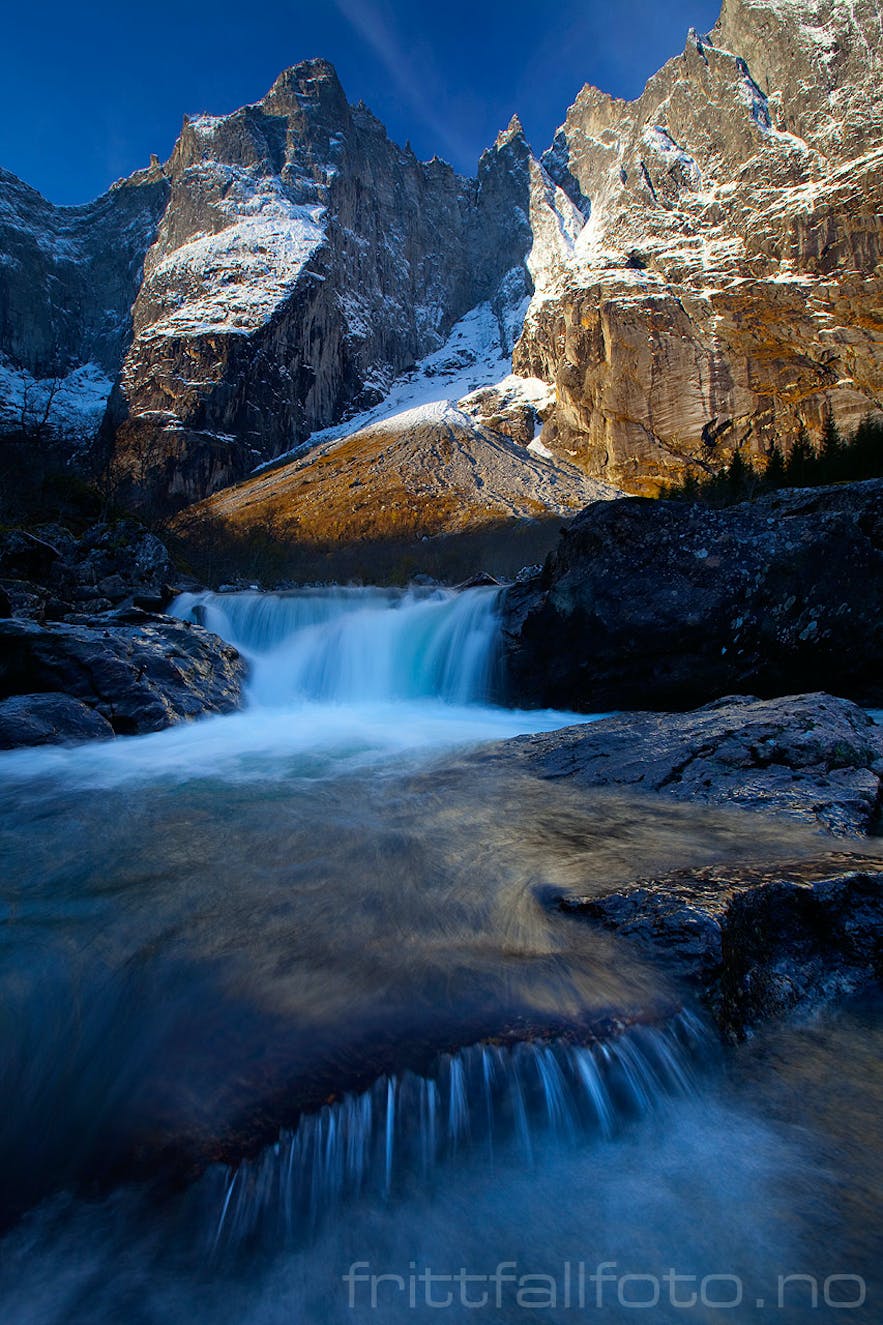 Jumping off the wall

On July 23 1980, Finnish skydiver Jorma Öster was the first to perform a BASE-jump from a Norwegian mountain, which was the Troll Wall. From the exit-point of Bruraskaret, the vertical drop is about 800 m. It was soon to become a famous BASE-jumping site, but a few years later they found an exit even higher up among the rock formations, increasing the height to a mere 1000 metres.

Norwegian BASE-jumper John Mjøen was the first to make a jump from Trollspiret, setting a then world record with 34 seconds of free fall, without a wing-suit. But the joy was not to last. Jumps resulted in several deaths, including film-maker Carl Boenish, and in 1986 BASE-jumping was prohibited in the Troll Wall area. 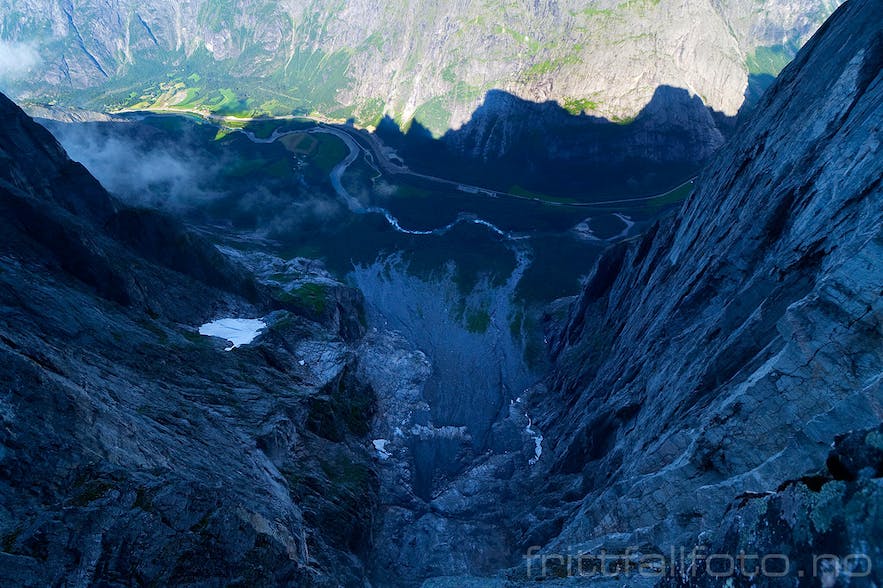 Hiking into the world of trolls

From the previous descriptions, one might think this is an area out of reach for anyone else than daredevils. This is not case, however you need to be reasonably fit and prepared for rough terrain to reach the edge. Extreme fear of heights is not recommended.

From the tourist facilities at the top of Trollstigen, there is approx a 3 hour hike to the edge at "Frokostplassen", which loosely translates to "Breakfast Viewpoint". Most visitors choose this as their hiking destination.

It involves hiking on rock and snow, and a couple of hard ascents. The difference in altitude between the start and goal is about 800 m, but there is no climbing or exposed spots, apart from the viewpoint. 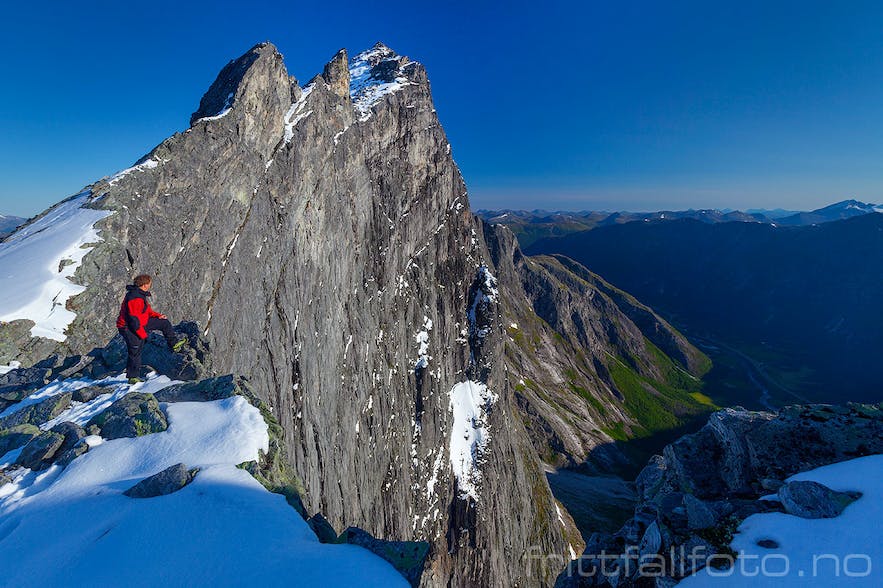 However, the real Troll Wall lies a little to the north. If you can handle walking in a very steep rock scree and on some narrow ledges above the abyss, you'll be able to reach the previously described BASE-jumping exit of Bruraskaret. Here you will have a magnificent view of the Troll Wall and its spires.

If you can do a little climbing as well, you can reach the highest peak even further up. This is called Store Trolltinden, and its top looms 1788 metres above sea level. Do not attempt this unless you are well trained and familiar with rocky and very steep terrain.

Needless to say again, fear of heights is not a good thing in this part of the world. 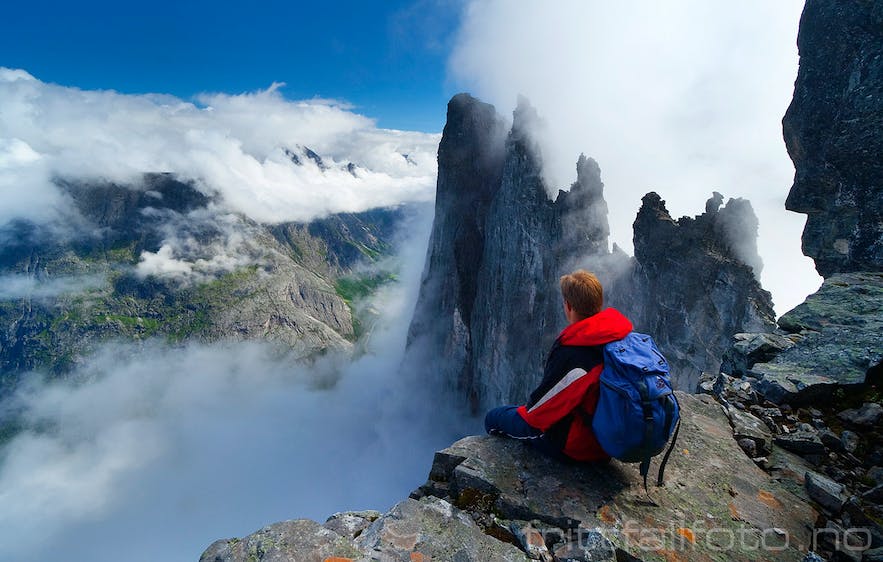 I did my first hike to these mountains in the summer of 1989, and since then they have became my favourites. The massif provides the most dramatic area of Norwegian peaks, and it holds a firm grip of my "mountain heart". As a landscape photographer, I have done several attempts at reaching the viewpoints when summer light is at its highest, in late June. Capturing a good sunrise here is the ultimate photographic goal for me.

The problem is that on this time of the year, large parts of the steep landscape is still covered in snow. This makes a hike extremely strenous, and there's also the danger of avalanches to consider. But I have managed to reach the goal a few times, spending the night on the edge in my sleeping bag. Then, when sunrise occurs around 3.30 am, the wall and spires is slowly transformed into a golden castle. There's nothing like it in the world. 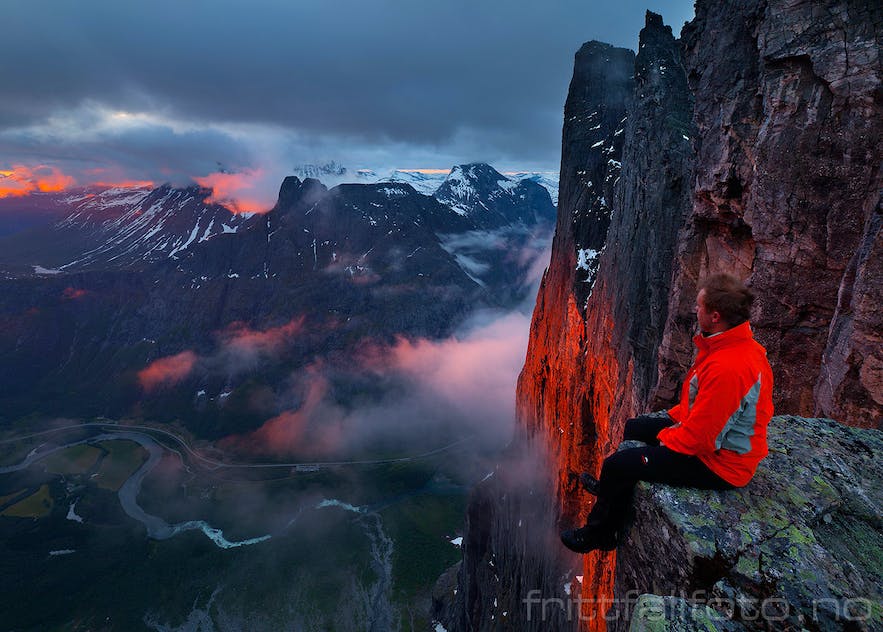 The end (Don't make it yours)

Before I end this article, I feel the need to stress this again: Do not ever attempt the hike from "Frokostplassen" to "Bruraskaret" if you're not familiar with this sort of terrain, especially when lots of snow cover the rock scree.

The view from the "breakfast viewpoint" is far better than the one inside a coffin. So, use your head (preferably the inside). You will have a wonderful experience in this area wether you choose to hike into the mountains, or stay in the valleys below. But for those who hike, and are used to the terrain, I hope you enjoy. 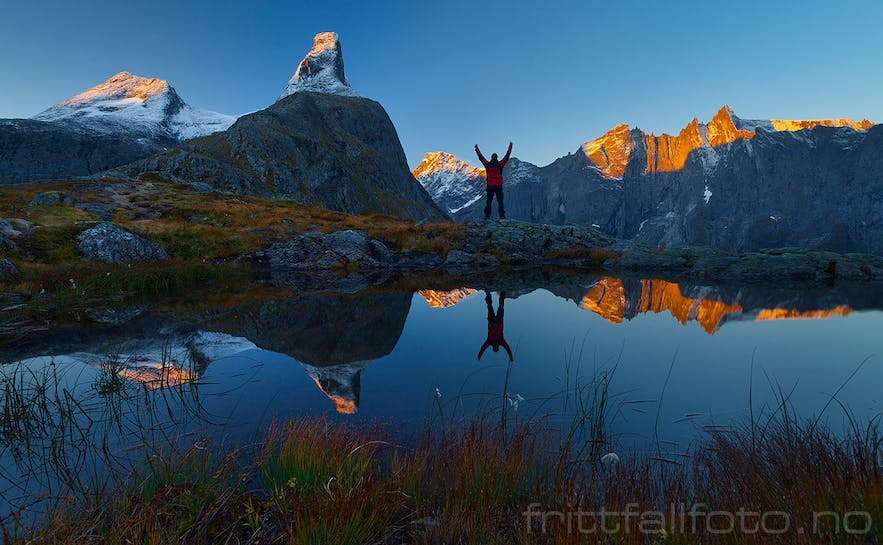