March and the first half of April is the perfect time for travels and hikes where you combine seeing at least two of the most beautiful scenarios nature has to offer. The source the title refers to, causes both of those before mentioned scenarios. I guess you have figured it out already...

In addition to being essential for life on Earth, the sun gives us some beautiful colors and play of light as it sets during the late evening.  Afterwards, when the night is sneaking up on you, sometimes even before the colored horizon darkens, the northern lights could show up. You wouldn't miss either one of these shows, I'm telling you!

Let's say you are going on a 6 to 8 hour travel by car, like a friend and I did on April 3. and a couple of hours into the night of the 4th. You makes yourself a mug of coffee, grabs something to eat, including a chocolate-bar or two. That will keep your energy and focus top notch all the way. You make sure to bring some additional warm clothes in case of a cold night. Do you have a camera, take that with you as well. Otherwise I bet you will regret!

Well, we were ready. I had a good feeling, the forecasts for both the weather and the northern lights looked promising. We took off around 6pm heading for Vik and Haukland, two popular beaches at Vestvågøy island, located side by side, almost as one beach, in the same bay. You'll find these beaches along the road named Fv 826, which also leads you straight to the next location we visited this evening; Uttakleiv.

The sun would set somewhere around 8pm. We arrived at Vik beach approximately an hour before. The conditions was exactly as we were hoping for; partly clouded with mostly clear sky. 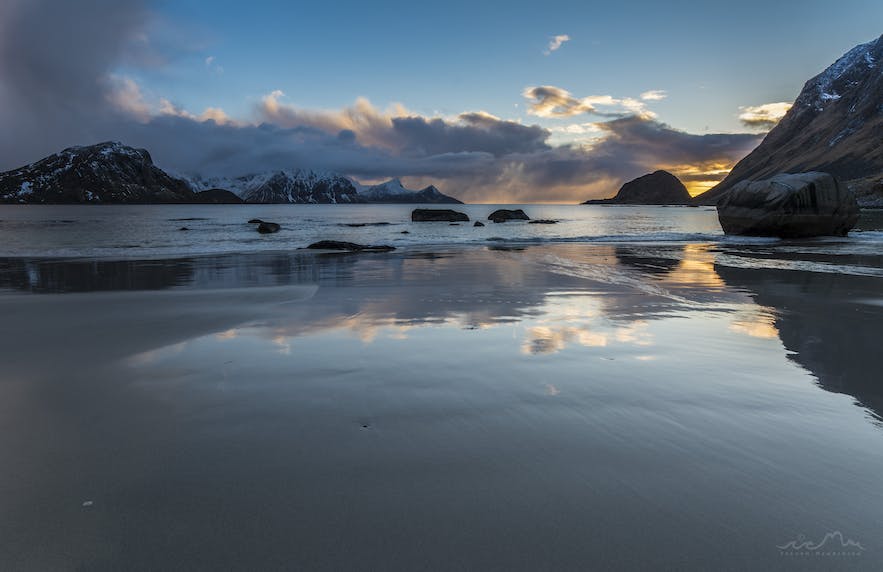 This photo is taken at Haukland beach. A snow squall passes over Flakstad island in the background.

The stream at Haukland excavates the sandbanks in different ways, due to how the waves affects the beach at high tide. Therefore the stream and the excavations never looks exactly the same way from day to day.

Now I'll take you to the extraordinary popular place of Uttakleiv, at the west coast of Vestvågøy island. Understandable this particular place could make anyone breathless when it shows off from its best side.

The photos below is taken with short time intervals, in opposite directions along the rocky part of the Uttakleiv beach. 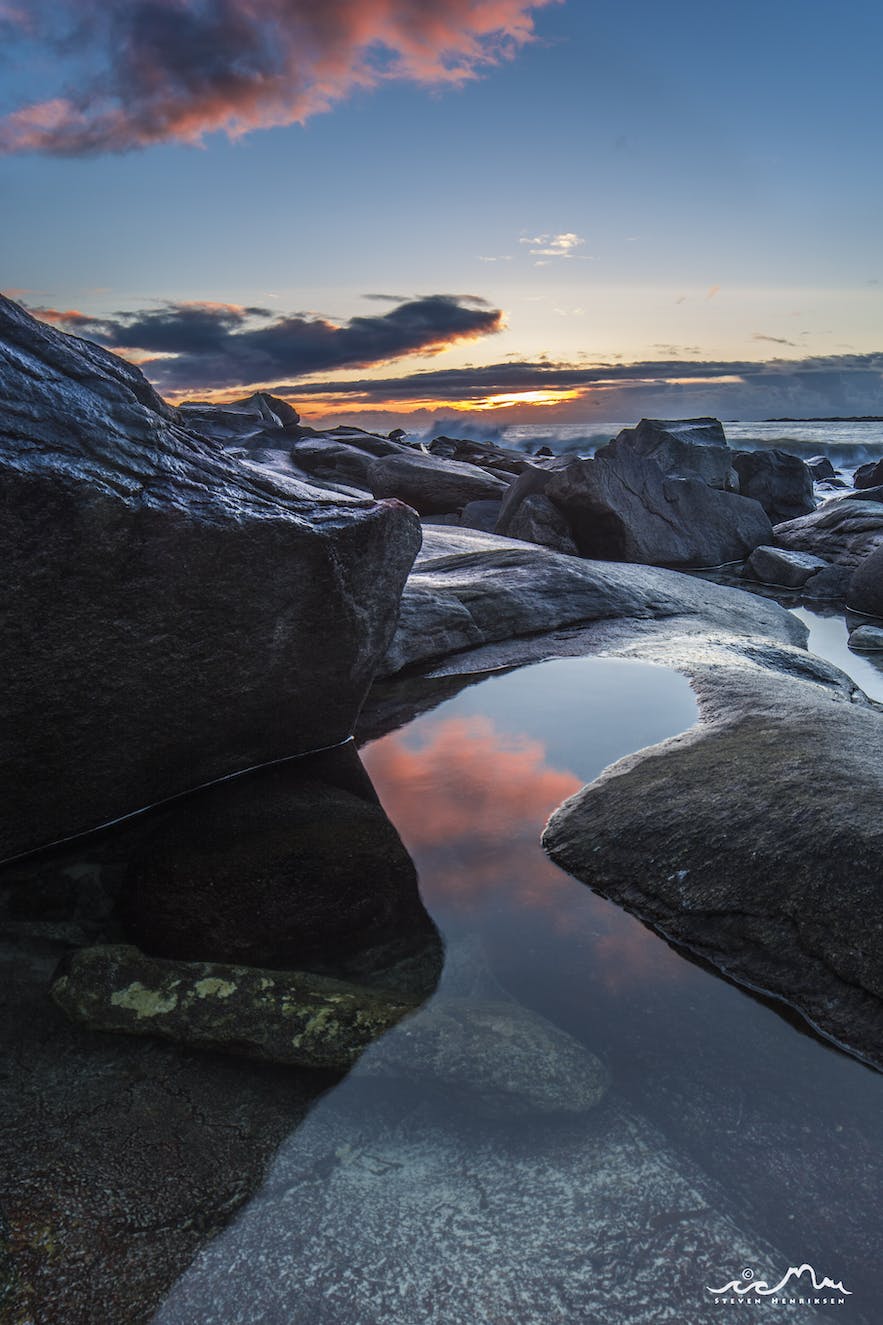 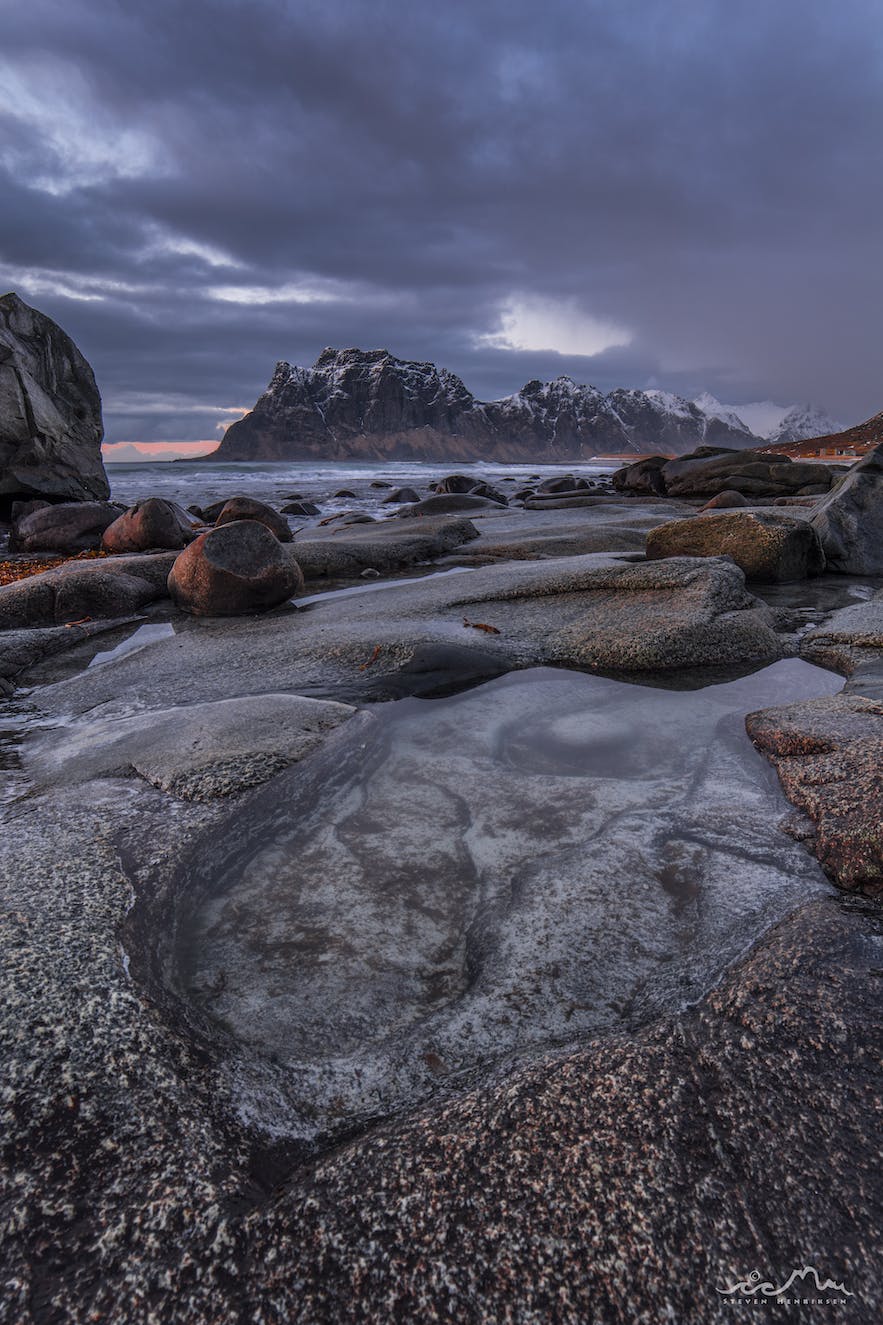 Uttakleiv will treat you with an endless amount of scenes to witness, take in, and shoot with your camera. Your own creativity as an artist sets the limits of what is possible. Even without a camera, you will have memories for life of nature scenes that you will never forget.

As the sun sets, a snow squall is on its way, this time from north-east. We decides to leave Vestvågøy island, and continue farther west, to the Flakstad island where we offshoots Storsandnes beach a visit. Here in the archipelago we have a proverb that goes like this: "It's like the weather in Lofoten" which means something that is changing a lot and very fast. And of course; arriving at Storsandnes the weather has changed for sure, and the view towards Haukland and Uttakleiv is quite different than I earlier thought it would be. Still I can't help admiring the unpredictable and very local change of weather behavior. You will often become surprised, not infrequently in a positive way. 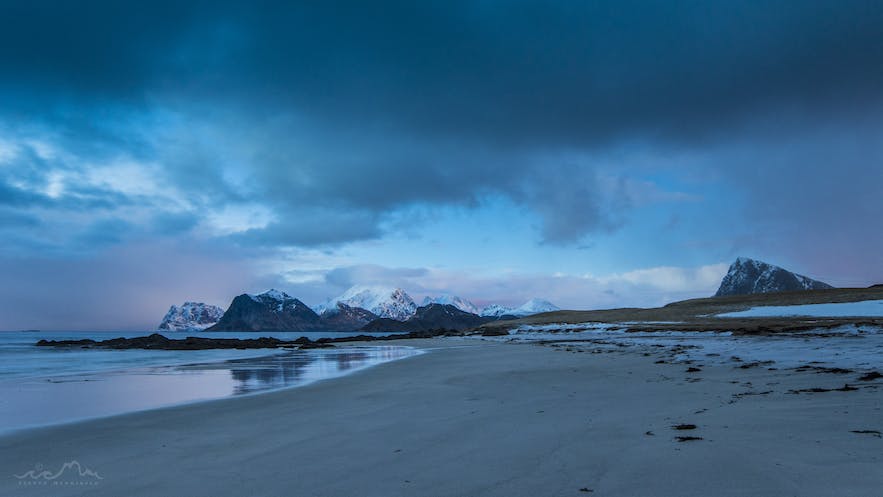 After shooting this long exposure shot at Storsandnes, the darkness was about to take over. My mind began to switch over at the northern lights. A quick check at my weather app from storm.no told me that there should be almost clear sky just at the other side of the mountains. So we drove the few kilometers through the village of Napp, over to Vareid where we discovered the first weak ark of northern lights, already around 9 pm. The horizon was quite bright and orange, so we barely could see it.

I mentioned in the beginning: "at least two scenarios" caused by the sun. Now we also discovered a third; the full moon that was rising above the mountains, east direction. Just WOW I thought! Everything seemed to become served on a silver platter for us tonight.

Since I only once before had been shooting the northern lights from Flakstad island, we decided to take place at the very popular Skagsanden beach which is located close to the main road, the E-10, at Flakstad, between Kilan and Ramberg village. We got in position, found a great spot and wondered why we were the only ones here on this promising night. Five minutes later the aurora-show took off. And what a great show it became. The beach was covered by a thin layer of powdery snow while the mountains around and the clouds far out, got lit up by the bright moon. Also the planet Venus shone bright and clear, low on the northern sky. 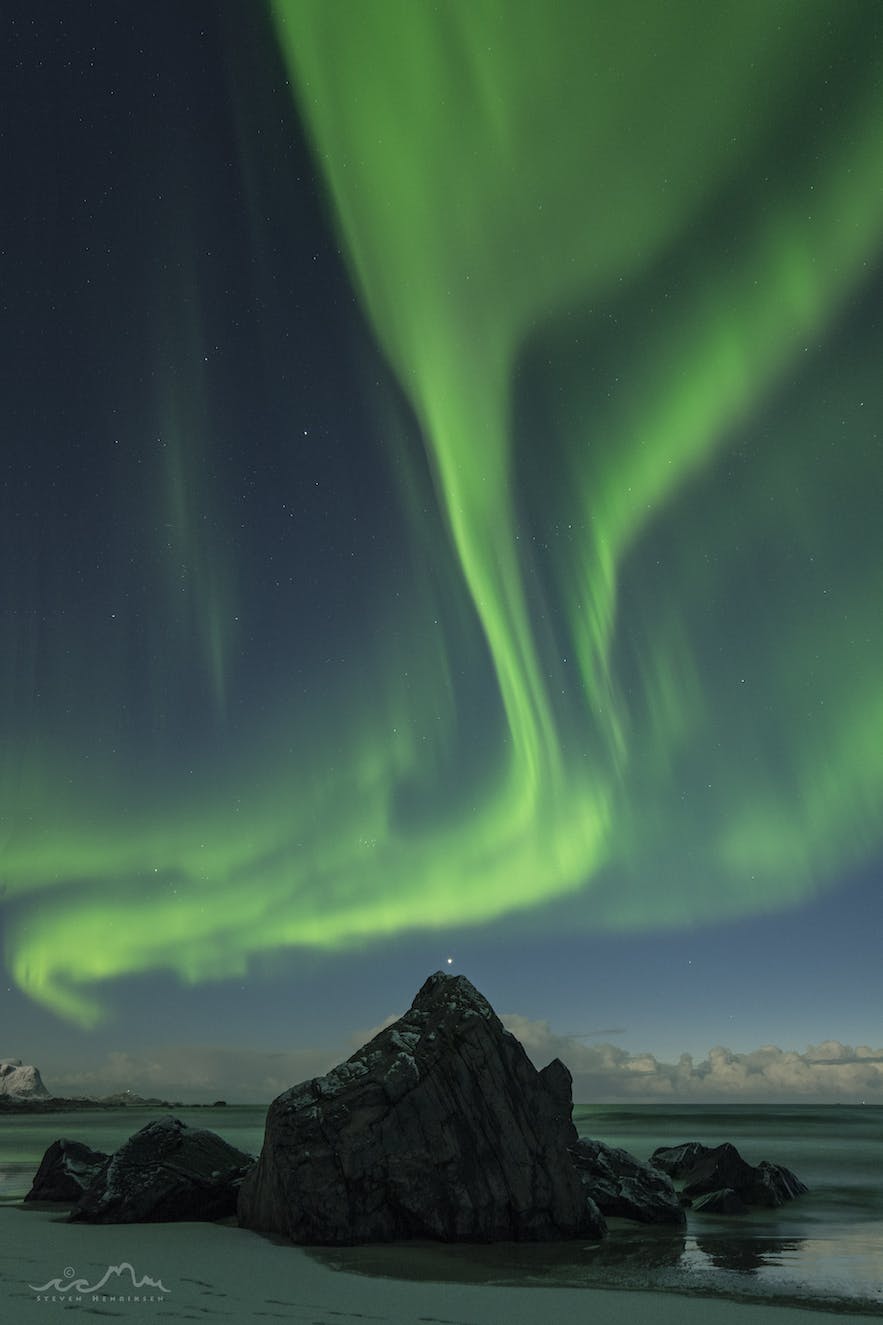 Northern lights appears due to solar winds produced by huge eruptions at the surface of the sun. These solar winds are loaded with gas which react with other gases in the atmosphere of the earth, which again causes the beautiful light-shows of Aurora Borealis aka Northern Lights. The higher the wind speed and the proton-density is, the bigger chance of seeing spectacular displays like this.

If you have questions about anything while planning a trip, or maybe you already have booked your accommodations, do not hesitate to contact us locals!

The show calmed after a while so we left the beautiful Skagsanden beach in favor of Fredvang, our last location before we would call it the day. I do not regret that choice either, as I was lucky to find another stunning scene, just before the second bridge on the road to Fredvang. The beautiful mount Volandstind and the full moon above a totally calm sea, was an amazing finale to this great night. It almost left me speechless as well.

Here it is... a view that reminds me of how lucky I am to be living in this particular arctic archipelago... 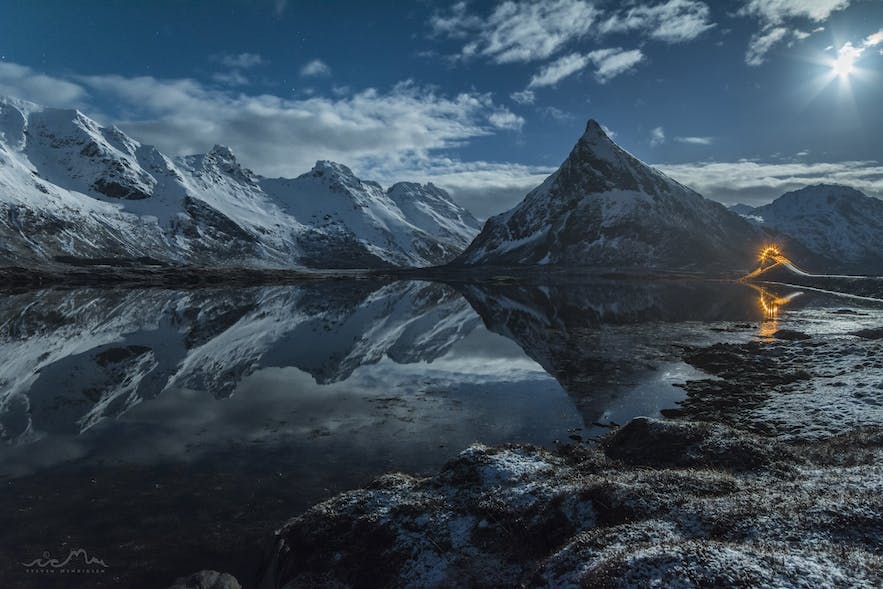 I hope you have enjoyed following me at this combined sunset, full moon and northern lights adventure through a small part of the Lofoten islands. Hopefully you got a little inspired as well, and maybe you could picture yourself doing the same some day.