Read this before you go hiking up Preikestolen

Preikestolen is one of the most popular tourist attraction in Norway. Every summer, well over 200,000 visitors make the climb up the imposing ledge and marvel at the view over Lysefjord. In this article, you will find the facts and information on how to visit this must-see attraction.

Preikestolen at a glance 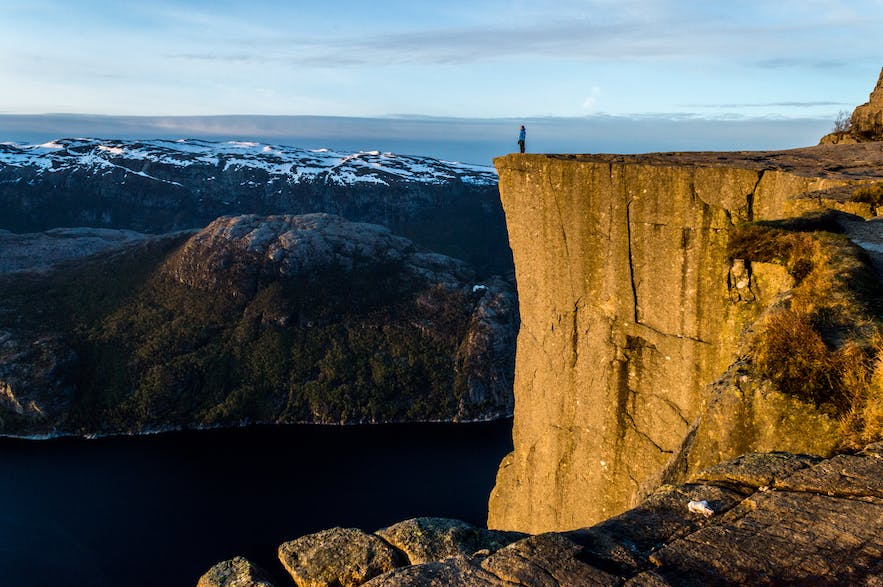 More than 10 thousand years ago, the enormous glacier whose weight ended up shaping Lysefjorden began to melt away. The water from the melting glacier forced its way through the mountain crevices, slowly chiselling away whole blocks out of the fjords mountainsides.

As enormous blocks of earth and rock were carried away by the moving glacier, it left one of Nature's most impressive sculptures as a farewell gift: Preikestolen. This iconic attraction will hardly need much introduction for any casual researcher of travelling to Norway. Any travel guide to Norway would seem incomplete without a picture of the imposing rock gazing over Lysefjorden.

The first thing you will notice when seeing the rock formation is its iconic shape. Seen from above, Preikestolen is close to being square on its top. The top measures approximately 25 meters in depth and width. 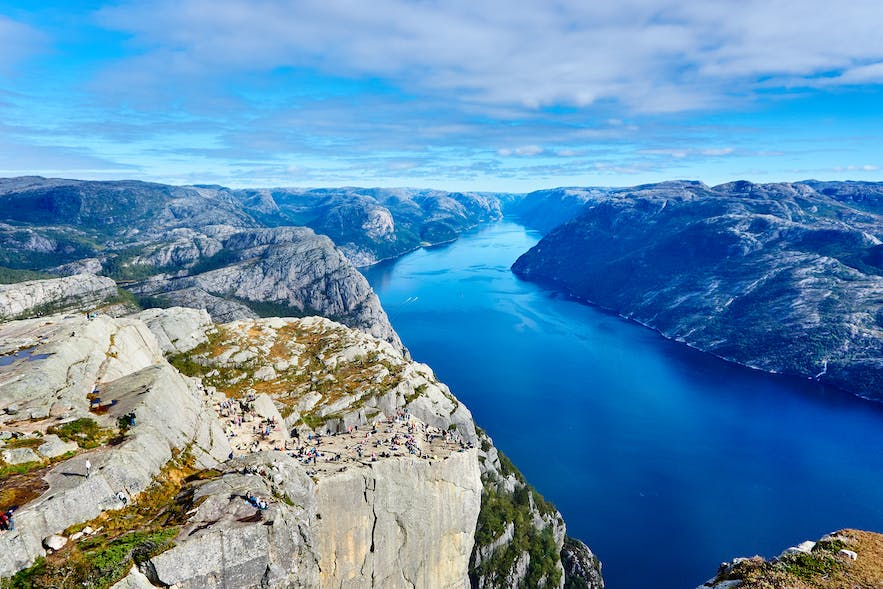 The original name given to the Preikestolen by locals was Hyvlatonnå, which is Old Norse. In the 19th century, a sportsman called Thomas Peter Randulf spotted the cliff while sailing on Lysefjorden and noticed its resemblance to a preachers pulpit. The name caught on and was used by the tourist organisation for the Stavanger region around 1900.

How to Hike Preikestolen

Despite its intimidating appearance, the hike up to the ledge is actually quite moderate. The hike up to the edge of Preikestolen will usually take the average hiker about one or two hours. The trail is 3.8 km each way and has a total elevation of 334 metres.

Getting to Preikestolen from Stavanger

Stavanger is the nearest city to Preikestolen. Getting to Preikestolen from Oslo by car is a roughly 7-hour drive and from Bergen, the drive is over 6 hours, with three ferry rides along the way. There are daily flights between Oslo and Stavanger as well as scheduled trains.

From Stavanger, you can get to Preikestolen either by bus or by boat, aside from getting there by car. The drive to Pulpit Rock is around one and a half hour and requires you to take the ferry between Lauvik and Oanes, which crosses Høgsfjord.

The ideal way to travel though is by boat. There is a daily departing Pulpit Rock cruise that takes you to Oanes. From there you take the bus to Preikestolenhytta, where you start your hike. Once back, the bus will drive you to Tau, where you meet up with the boat again and cruise back to Stavanger.

Is it safe to go up there?

In order to not spoil the natural beauty of Preikestolen, authorities have up until now opted for not installing fences around the edges of Preikestolen. The general opinion in Norway is that nature is inherently dangerous and it should not be the authorities mission to baby proof nature in a way that would make it unnatural.

Remember that you are there at your own risk. Act accordingly.

However, despite the limited precautionary measures, the Pulpit Rock has experienced very few fatalities. This is a fact, even though it is one of Norway's most visited attraction.

What should I bring?

Due to quick changes in weather conditions, you should always be properly equipped when hiking in Norway. Trekking shoes and rain gear are advised for most hikes in Norway.

As there are no facilities at the top, you should make sure to bring sufficient food and drink to consume along the way.

When is the best time to hike?

The best time to hike up to Preikestolen is from April to October. During the winter and spring months, the track might be slippery due to snow and ice. As the trail is quite steep along the way, the hike up can be demanding in adverse weather conditions.

The busiest period is during the months of July and August, so for those who would like to discover Pulpit Rock in less busy months, the months during the shoulder season are recommended.

What are other attractions nearby?

Lysefjorden, undoubtedly one of Norway's most prominent fjords, is home to Preikestolen. Aside from Preikestolen, Lysefjord sports several beautiful waterfalls. However, the most known attraction in Lysefjorden apart from Pulpit Rock would have to be the Kjerag mountain. This popular hiking destination peeks at 1,110 meters and has been popularized by the iconic spherical rock that sits in a crevasse along the trail up.

Still have questions? Let us know in the comment section below.